The Setting of Corinth

Paul, Silas, and Timothy arrive in Corinth from Athens 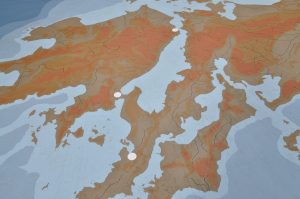 This photo of our Mediterranean Sea Courtyard is looking from East to West. Athens is the white dot in the lower center of the photo.  In Acts 17 Paul, Silas and Timothy have been ministering in Macedonia and have just arrived in Athens.  From there they would have walked west across the province of Attica to Corinth at the center white dot.  Note it is located on the left (south) of a four-mile-wide isthmus connecting mainland Greece with the Peloponnese Peninsula on the upper-left.  The upper white port (Patras) is the gateway to the Ionian Sea and onward to Rome.  Corinth is by far the largest city Paul encountered during his missionary journeys.  The city had Jews and Pagan Gentiles. Many slaves were needed to move merchandise across the isthmus, and many wealthy merchants settled there.  It also was a Roman Colony in Greece, so it was bi-cultural and bi-lingual.  Until this time, Paul’s strategy was to begin his stay in a new town by preaching in the synagogue.  But if conflict arose, he would move to a house and begin a congregation there.  If conflict continued, he would then move on to another town.   However, Corinth with its two harbors for sailors to winter, was a giant city and had a population constantly changing because of its shipping trade.  By staying there longer, he could meet far more people than by constantly hiking on to new towns. 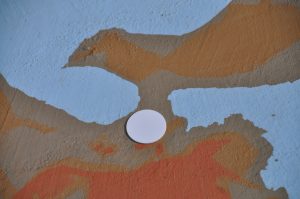 As people involved in the real estate business say, “the value of the property is location, location, location!”  This close-up photo shows the city of Corinth between the tan peninsula and the reddish-brown Acrocorinth mountain.  The land setting of Corinth is like the pinched center of an hour glass.  All north-south land roads must go by it.  Two important sea harbors served it as well.  The western (left) is the Lechneam port which is for travel to and from Rome.  The eastern (right) is the Cenchreae port used for travel to the Aegean Sea.  Tolls collected for transport of goods across the isthmus made Corinth a wealthy city. This isthmus was also the setting for thousands of spectators every two years for the Olympic Isthmean Games on odd years.  Paul met Priscilla and Aquilla in Corinth, who were also tent-makers (Acts 18:3).  They were from Rome but had to leave when Emperor Claudius expulsed the Jewish population in 49 CE.  This helps us date Paul’s arrival after that time.  The three of them may have made many tents for the crowds that came for the Isthmean Games in 49 or 51 CE while he was probably there.  Throughout his travels Paul insisted upon earning his own keep and paying for his companions Silas and Timothy.   If he had accepted help from some Corinthians, in their culture, he would be beholden to them. 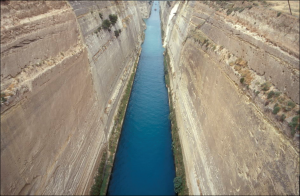 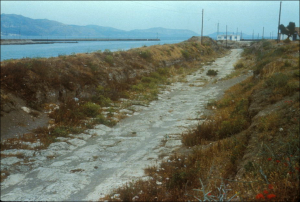 One can see in this photo that the modern Corinthian Canal (left photo) was a monumental undertaking because in order for the water to flow, it had to be dug 82 feet down into the isthmus rock.  Emperor Nero began to dig the canal alongside the place of dragging (right photo).  He used Jewish slaves (from the Jewish Revolt against Rome in Galilee), but he could not finish it.  It was not until more modern equipment used by the French that it was completed in 1893.  These two ports and the Olympic games made Corinth an important sailor and tourist city.  In fact, Corinth had a reputation throughout the Mediterranean Sea of being a “rowdy” city with loose morals and an abundance of prostitutes.  Apparently, its reputation for prostitution is indicated by a saying that, “not everybody can afford a trip to Corinth.”  This photo (right) shows remnants of the road known as “the place of dragging” where cargoes, and even small boats on ox-drawn carts, could transfer commerce between the Western and Eastern Mediterranean Seas.  It seems to have been used until the town’s destruction by an earthquake in the 7th Century CE.  It wasn’t until the Middle Ages that Frankish, Turkish and Venetian fortresses were built upon the Acrocorinth hill. 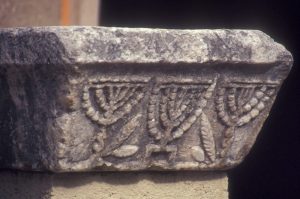 As was his custom, when Paul arrived at Corinth in Acts 18:1-4, he went directly to one of its synagogues.  Though this stone was found in secondary use, it is evidence of a Jewish community in Corinth.   Being one of the largest cities in the First Century, there may have been a number of synagogues there.  We are told that Chrispus, an official of the synagogue, became a believer and was baptized (vs. 8).  The letters traditionally from Paul to the Corinthians indicate there were many factions within the Jewish and Christian communities there.  One was led by an Alexandrian Jewish covert named Apollos (I Cor 1:12). 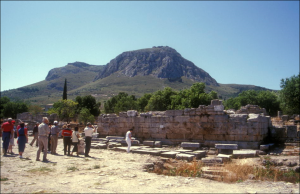 Conflict from some in the synagogue came against Paul and he was brought to the tribunal of Attica, named Gallio.  The tribunal showed no sympathy for the accusers and acquitted Paul.  This photo shows a judgment seat (Bema) in the outdoor market of Corinth.  Rising high behind it the photo shows the Acrocorinth mountain where there was a temple honoring Venus-Aphrodite.  The writer Strabo visited Corinth in the First Century BCE and noted that the Temple of Aphrodite atop the mountain had a thousand temple-slaves dedicated to the goddess.  A second site in Corinth had an indoor bema, which may have been used if the trial was during winter.  Gallio’s reign began in 50 CE.  He is praised as being an efficient ruler in Roman sources.  This date helps scholars know when to date Paul’s visit to Corinth.  This sympathetic government official may have contributed to Paul feeling he could stay in Corinth for a year and a half.  Also, Paul was a Roman citizen and Corinth was a Roman Colony in Greece.  He would have enjoyed more legal freedoms there. 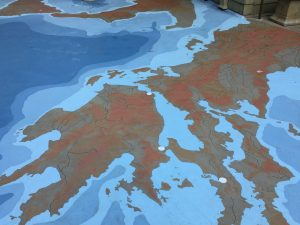 Seafaring was complicated around the Peloponnese Peninsula (the finger-like extensions on the bottom-left).  The dark color of the Mediterranean shows very deep waters which makes travel around the peninsula very dangerous.  Sailors in antiquity had a saying that, “before traveling around the peninsula one should first write a will to their family!”  The book of Romans notes that Paul wrote their epistle while in Corinth and then gave it to Phoebe to take it to the Romans.  This trusted deaconess in the church and colleague of Paul had helped him, and the Romans are told to assist her in any way they could when she arrived.  For safety reasons Phoebe probably sailed from the Lechneam harbor (above the Corinth white circle) up the map past Patras (upper white dot) and across the Adriatic Sea and on to Italy (note the boot shape at the top of the map).

More thoughts can be found in “The Epistles and Their Cities,” by Dr. James Fleming.  This book, and others by Dr. Fleming, can be purchased online at www.biblicalresources.net or by calling 706-298-7393.