On the slopes above the Sea of Galilee the disciples ask Jesus, “Teach us to pray as John taught his disciples to pray,” and so we have the Lords Prayer which we say so often, sometimes without even thinking.

In Matthew and Mark it was on the hills above the Sea of Galilee where this scene is set.  In John, the Lord’s Prayer is given on the Mount of Olives.  Is this a conflict? 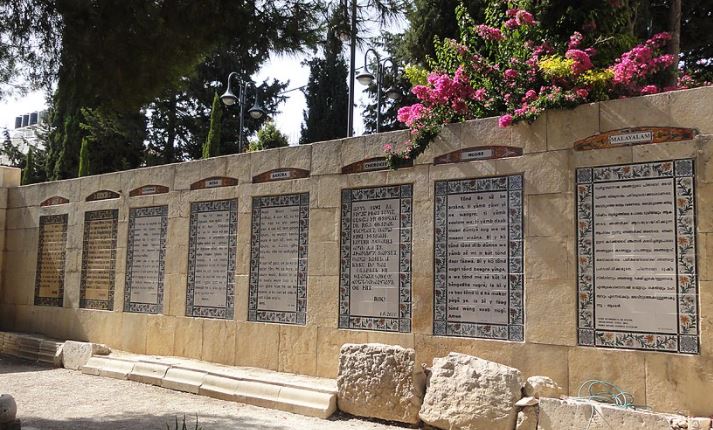 No.  This prayer was prayed every day.  It says, “Give us our daily bread.”  It was a daily prayer.  They prayed many times in many places.

There is a church on the Mount of Olives, the Church of the Pater Noster.  There are plaques there with the Lord’s Prayer shown in more than 100 different languages and dialects.

The Lord’s Prayer is plural, not singular. One thing that distinguishes Jewish prayers from most Christian prayers is that Jewish prayers are always plural.  We have “Our father . . . our daily bread . . . our sins.”  You see, if you are thanking the Lord or praying for your daily bread, you might forget the people at the other end of the table who do not have as much as you do.  You might hog it all at your end of the table.  Prayers are plural because we are in this together, and we need each other.

There was a Rabbi at Hebrew University who taught a class called “Jewish Prayer.”  All of the Jewish students signed up for it wondering what the first class would be like.  Actually, the first class was devoted to the Lord’s Prayer.  It has all of the elements of a good Jewish prayer.  In fact, the Lord’s Prayer is one of the few Christian prayers a Jew can pray because it does not say, “In Jesus’ name, Amen.”  It says “Amen.”  It has all of the richness of the prayers of Judaism.  There is not one prayer in the Jewish prayer book that a Christian cannot pray.  It would do Christians good to say the prayers in the Jewish prayer book to remind us how they are prayers for “our” and not just “my.”

On the slopes above Capernaum, Jesus teaches the disciples to pray.  They are very much a community.  One of the main adjustments most of us have in trying to get into the thinking of the biblical world is to see things collectively rather than individually.  You and I are living in an individualistic society, but the Bible is a collective conscience.  Everything is “us” in the Bible.

The people of the bible were used to sharing things because they were all in it together.  On the Day of Atonement there was a scapegoat, and all Israelite males went to the Temple for the ceremony for the forgiveness of God.  They represented their families, and no one asked where the rest of the family was because each male represented the whole family.

In Jericho, when Achan steals the booty from a town, he and his family are killed.  The people had been told not to take any booty.  The western mind has a lot more trouble with that kind of thinking than the ancient mind.  They were all in it.  They were all family.  They probably talked about it together beforehand and divided it between them afterwards.  It is the idea of collective responsibility.

The  prophets prayed when they believed the Babylonians and the Syrians were coming.  They prayed, “We have sinned against you, Lord.  We accept the enemies punishing our people.  We are guilty.”  Whether the prophet was guilty or not does not matter because “we” are guilty.  They could more easily understand things collectively.

In the ancient times people lived in community and they were buried in community.  In later period tombs, such as in the last days of Judah, we find special benches that were made for headrests.  These tombs were for large extended families, so there would be several places for a body to decompose.  Underneath would be a repository, a room where they put the bones after the body had decomposed.  This practice was called “Gathering them to their ancestors.”  Metaphorically it was called “Abraham’s bosom.”  In old Engliish it would be “slept with their fathers.”  They were buried in the community, they were put with those who brought them to where they were now.  They were gathered to their ancestors. 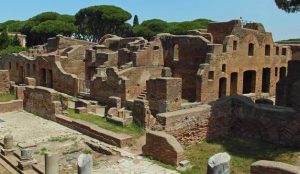 In Jesus’ day the people lived in houses called insulas.  Insula means “island” in Latin.  It is an alley surrounded by a cluster of rooms.  One house (or insula) would have 20 to 40 rooms for 100 occupants.  (This is a picture of a Roman insula.)  Grandparents and children and grandchildren and relatives by marriage all lived in one house.  Everybody knows everything about everybody.  There are no private rooms.  There is no private property.  Everything is “us” and “our.”  The people are poor, and in order to make ends meet, they share.

A wealthy family did not have that many relatives living with them, but the rooms were full of servants.  In any case, mom and dad and the kids slept in one room – which is why Jesus, talking about prayer, says “Which of you, if someone banged on your door in the middle of the night asking, ‘Do you have some bread that you can lend me to feed my guest?’ would not respond, ‘I am in bed with my wife and kids. Go next door.'”

On cold nights you bundle up together; you don’t have the privilege of everything being private.  Everything is “ours” in the biblical world.  You care for each other.  You don’t need special homes for the elderly because they are with you.  It is the way of life.

Imagine the extended family with Jesus and the twelve disciples, and the wives and children of those twelve who were married, all living and studying together.  One day some followers climb up to the roof and walk over until they get to a room where they can hear a class going on inside.  They start jumping on the roof, which would have branches and about four inches of dirt on it.  Can you imagine being inside and hearing that racket?  Dirt starts falling through.  You step to a wall of the room just as a streak of light shines through the dust.  A man is lowered in.  Now, listen for a word you might

not have noticed in this story about the healing of a paralytic in Matthew:  “When Jesus saw their faith . . .”  It was the faith of his friends, not the faith of the paralyzed man that healed him.

When the people of the early church stayed in Jerusalem from Passover to Pentecost, they lived in community.  It was no big deal.  They were used to it.  To make ends meet they always shared.

The Lord’s Prayer is a plural prayer.

In several places scripture says, “If you ask me for anything in my name I will do it.”  But a preceding or following verse adds the requirement to “love me and keep my commandments.”  None of us would say that we have gone very far in being able to keep the Lord’s commandments.  It is such a high ideal; we have just taken the initial steps on that pilgrimage.  But you are stronger in some gifts than I am, and together our community reflects the character of Christ by God’s grace.  As we pray in our community, let us help each other pray.  And let us ask the Lord to help us to learn to pray in the name and character of Jesus with all its implications.