The Kingdom of God – Jesus Temptations

We have talked about the environment of the first century when Jesus was was teaching.  The concept of Messiah as a military conqueror or a king who would rule with power and control was prevalent.  John the Baptist, preaching about preparing for the Messiah, was well known and popular with the people.  Then Jesus comes along and presents a different perspective on the Messiah and the Kingdom of God.

Here is a chart of “Jewish theology” of temptation.  The same three themes of temptation exist in these parallel texts.

Genesis 3:6 gives us a beginning from the pre-history of the ancient Israelites as to how temptation was understood.  The stomach means to enjoy (turn these stones to bread.)  Eyes are to have, collect, or aggrandize (Jesus “sees the kingdoms of the world.”)  Enticing to make one wise is the pride of life (to do something at the pinnacle of the temple means to be recognized in your own time.  And I John 2;16 summarized the temptations as lust of the flesh, desires of the eyes, and the pride of life.  We should not be surprised to find these three themes spoken about throughout scripture when temptation and human inclination toward self-interests are discussed. 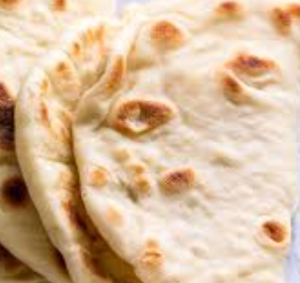 The wilderness is a rock pile – there are rocks everywhere.  When you spend time in the wilderness, if you are fasting, after a couple of days all the rocks begin to look like pita bread!  Jesus was tempted to “turn these stones into bread.”  Of course the temptation is that if you are king, you have slaves and servants and have an enjoyable life.  The synoptic gospels have Jesus struggle with the notion of what kind of king God would have him be.  There are all sorts of models of different kinds of kings in the Hebrew Bible, but there were no models of good kings in the first century.  The Roman appointed governors were abusers of power and lived enjoyable lives at the expense of others.  Of course Jesus came to give joy to others – not selfishly to enjoy himself.  This is a very strange paradox.  Some of us from time to time have had a glimpse of the surprising joy that comes from giving of yourself, your time, and your money.  It is strange but it is the opposite of what we would think.  The servant Messiah finds joy.  This is expressed in the mystery – for the joys set before him, he endured the cross.  This is the model Jesus took for kingdom, which is very different from what people thought (that they could be on top instead of the Romans). 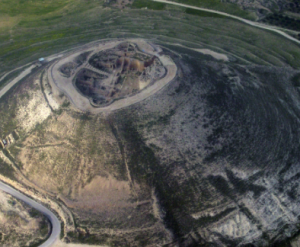 There were cities in the wilderness of Judea built by kings.  Archaeological discoveries in Judea have given us new insights about the wilderness where Jesus was tempted.  John Hurcanus, a Hasmonean king, built a palace in the wilderness around 130 B.C.E.  He named it Hyrcania, after himself.  In this period the palaces were desert fortresses where the kings could retire if things got bad.  The wilderness was a refuge both in a physical context and a spiritual context.  There were lower cities around the palaces which were where the servants lived.  Herod built a palace on an artificially made hill in this picture.  He had the top of one hill cut off and put it on top of another.  The upper fortress was on the top, the palace grounds included a parade area, a reflection pool, a steam bath compound, and t three-story high storage area.  He named this the Herodian.  It was second in size only to Nero’s palace in Rome.  These palaces made by kings were in the wilderness where Jesus was for many days.  We can now understand the things around Jesus in the wilderness that help illustrate the temptation stories.

We know that Jesus could see cities and palace as he walked around those many days in the wilderness.  Eyes mean to covet, collect, and gather things to one’s self.  This is a pretty good one-line summary of what most kings do.  They are very good at collecting, gathering, and aggrandizing.  The idea is to take.  The Zealots had an image of king and kingdom in which they could take from the Romans in turn for what the Romans had been taking from them.  But Jesus is a king who gives rather than takes.  Where will you find the Kingdom of God?  In a place of giving rather than taking.  This is a radicalized notion of the kingdom.  Jesus was a servant-king, a servant Messiah.

As an archaeologist who is responsible for excavating the material culture of the past, it is easy to wish that Jesus had not resisted the temptation to gather things!  It would be great to find a marble lined palace with a sign over the bed, “Jesus slept here.”  Jesus could have gathered things to himself.  But the only things we know that Jesus gathered to himself were the five articles of clothing over which the four soldiers gambled upon his death.  That is all, shall we say, that Jesus took from this world. 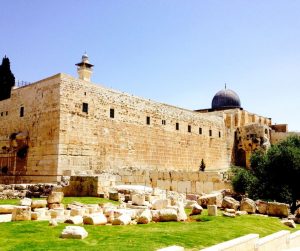 Instead, when word gets out that Jesus’ disciples are baptizing more than John in Judea, Jesus left Judea.  And Jesus said “mum” is the word” in the healing stories.  Jesus wanted attention to come to God and not to himself. Jesus would not even say he was Messiah.  Jesus’ wanted people to be drawn to the kingdom, not coerced into the kingdom .  In John 7 when Jesus’ relatives were impatient and said “why are you doing in secret what must be declared openly?  If you are Messiah, reveal yourself in Jerusalem.”  Jesus said, “No, you go to Jerusalem for the Feast of Tabernacles.”  His relatives went to Jerusalem and spread the word that Jesus was not coming.  Then, Jesus went to Jerusalem.  He went low profile rather than high profile.  Jesus went to Jerusalem anonymously.  This is consistent with Jesus’ notion of Servant Messiah and it is worthwhile for us to keep in mind.