The Kingdom of God – A Brief History of Qumran

There was no time of greater Messianic speculation in any period of Judaism than between 63 BCE and 70 CE.  We know this from the written materials found at Qumran.  Jews were anticipating God’s kingdom would come quickly. First we will look at the expectations of the kingdom from the Qumran materials.  Next time we will look at the kingdom as expected in the preaching of John the Baptist, and then the kingdom that Jesus struggled with in the wilderness of Judea.

Josephus, the Jewish historian, tells us that the Essenes of Qumran were a priestly group.  They were descendants of the Zadok priests.  In the Old Testament there was separation of temple and state.  The family of David was king and the Levites were priests.  The high priests were Zadok priests, a line of priestly families.  This separation of temple and state was to help make sure that the temple could be corrective to the state and not “rubber stamp” the state.  Something remarkable happened in 164 BCE when the Jews successfully drove out the Seleucid garrisons that controlled Jerusalem from 167 to 164 BCE.  This is called the Maccabean or Hasmonean period.  The greek superpower based at Damascus sacrificed a pig on the altar and surrounded the temple with a garrison and prohibited Jews from coming to the temple.  A Priestly family with the last name of Hasmon came from a town called Modiin and the youngest son’s name was Judas Maccabeus.  The priestly family is called the Maccabeans, but they should be called Hasmoneans.  This family rallied the Jewish population and organized a resistance movement in a three and a half year war and drove out the Seleucids.  With this success the Jews began becoming independent from the Greeks.  The garrison could not be re-supplied because each attempt to restock was defeated by the Maccabeans. 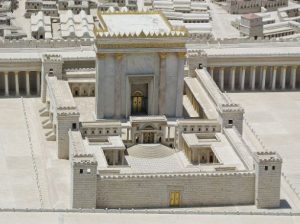 The Hasmon family is very important as it then became both high priest and king.  There was no separation of temple and state.  What do you think Zadok priests are going to think about this?  Between 164 BCE and 130 BCE as Zadok priests die, they are replaced by Hasmonean priests from that priestly family.  After several years of this, in the 150s BCE, a Zadok high priest was kicked out of the temple.  He started an anti-temple resistance movement.  The Qumran materials call him “The Teacher of Righteousness.”  And they referred to a wicked priest who is understood by scholars to be a Hasmonean priest who expelled the Teacher of Righteousness from the temple.  After this point there was no separation of temple and state.  Rabbis, imams, ministers, and priests are not supposed to say to any king, “All that thou sayest is good.”  They are supposed to be able to speak against the king.  Thus, there tends to be much corruption in times when there is no separation of “temple/church/mosque” and state.  By 130 BCE all of the Zadok priests were out of the temple and no longer had influence.  Revolution was ocuring in the temple. 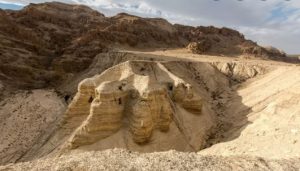 The people did not live at Qumran, they went their for their shift of work and they lived in the caves.  There were three eight-hour shifts per day and one came down to Qumran to work the shift.  One third of one’s life was to be devoted to piety within the community.  A ceremonial immersion bath was used before entering Qumran precincts.  The members of the community were from priestly families and were used to following ritual purity procedures.  The form of religion practiced by the Essene community is called “scrupulosity.”  They were very scrupulous and paid much attention to detail.

The temple in Jerusalem administered by the priestly family of Hasmon was evil in the eyes of the Essene community.  The smoke going out from the altar of Jerusalem in the view of the Essene community was “a stench to the nostrils of God.”  The Essenes believed they had to replace that smoke with their piety, scripture, and prayers that would be a sweet savor to God.  Therefore, in addition to the community work, there were also eight-hour shifts of reading the scripture and prayers that went through the day and night.  We would call this a “vigil” service.  This practice seems to have gone on from 150 BCE to 70 CE.  They believed that only their piety kept the nation from being destroyed.  They felt that if so many people were evil that they would balance things out by being so pious.  They were so strict on the Sabbath that they would not even relieve themselves – they held it!  They were very strict on the laws of purity.

Josephus tells us that from 43 to 39 BCE, very soon after the priests started building Qumran, when Herod the Great came to power and fought the Hasmoneans.  The Qumran community believed he was a messenger of God because the Hasmoneans were wicked priests. These wicked priests kicked their Teacher of Righteousness, the Zadok priest, out of the temple.  Josephus says the Essenes fought Herod the Great’s army against the Hasmoneans.  Politics makes very strange bedfellows.  Think of the difference of the piety of the Essenes of Qumran and the lack of any moral scruples on the part of Herod the Great.  A common enemy can result in strange alliances. According to Josephus, the Essenes hoped Herod would reward them for fighting with him and give them the temple.

Herod did the same thing the Hasmoneans did when they took over the temple.  He arranged to have the last Hasmonean priest killed.  The people were used to this kind of behavior, so they instantly anointed the 16-year-old son, Aristobulus the IV, the son of Aristobulus III, the last Hasmonean priest.  Herod did not expect them to make the 16-year-old priest.  So Herod invited the boy to his swimming pool in Jericho and arranged for his servants to “sport with the lad” and they held him under water too long.  Herod had even this last Hasmonean priest killed.  He came out from his palace and publicly cried, “Oh, what a terrible accident, I almost feel responsible – it was in my own pool.  I guess I’ll just have to appoint my own priest now.”  Thus the priests oft he temple, in the time of Jesus, were Herodian party line cronies.  They were corrupt families that Herod controlled.

One of the most important implications of studying the scrolls found in Qumran is discovering the extent of an anti-temple movement in the first century.  Before the Qumran materials were published, it was thought that the sermon of Stephen in Acts 7 was the most anti-temple first century document.  Stephen was called to the Sanhedrin and talked about how bad the priests who controlled the temple were and how the chief priestly families were responsible for the death of Jesus.  We now know that Stephen’s sermon is child’s play compared with what the Essenes say about the temple.

Why is this history important?  It sets the stage and helps us understand the environment of Jesus time.  The notion of the Kingdom of God to religious Jews to whom Jesus ministered was military.  One of the scrolls, “The War of the Sons of Light Against the Sons of Darkness” indicates there would be battles.  To these religious Jews, the Kingdom of God was in the future and it would involve military might.  The Essenes believed they would be solders in that kingdom.  They were fighting with Herod against the Hasmoneans.  Others wanted to fight against the Romans.  There was much Messianic speculation about who would be the one to deliver them.

Today we set the environmental stage.  Next time we will look at the kingdom from John the Baptist’s point of view, and after that how Jesus spoke about the kingdom of God.