Our new museum is designed to illustrate events located around the four major biblical seas.  This week we have just completed a new exhibit which enlightens two Gospel stories set along the shoreline of the Sea of Galilee pictured here.

The Galilee story of the contrast of two women in Luke 8:40-55 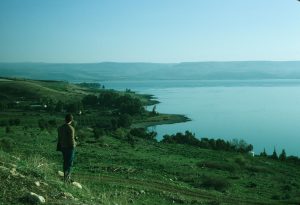 This is a view of the Sea of Galilee shore where this story is set.  It begins when Jesus returns from the east side of the sea to the Plain of Gennesaret where a crowd welcomed him.  In the photo a man is standing at the ruin of Gennesaret with several coves along the shoreline in the distance.  The last cove above him, where trees reach the water’s edge, is where the town of Capernaum is located.  This is where the daughter of the synagogue’s ruler lived.  From there a three-mile journey would have been taken by the synagogue ruler’s servants to the location where the unclean woman touched the hem of Jesus garment.  Modern Gospel readers are privileged to live in a time when these locations are known and we can better picture the story settings of these two women.

The First Woman in Need: Lk 8:42-48
She has had a woman’s problem for 12 years.  Blood coming from her body has put her in the category of being “ritually unclean”. She would have been shunned by religiously observant Jews.  She would have been isolated from all her family and friends.  She is now very poor because she has “spent all that she had on cures”.  She could only approach Jesus, unseen, from behind because a crowd was pushing Jesus to rush to the synagogue ruler’s house.  Because the crowd had pressed around Jesus, she could only touch the hem of his garment, believing she had to get close to him.  Jesus stopped and assured her that it was alright that she had touched his garment hem.  She then believed she had been completely healed.

The Second Woman in Need: Lk 8:49-55
This 12-year-old girl who just become a woman has such a high fever she may have gone into a coma (since some “believed she had died”). Her father was a religiously pure ruler of the town synagogue.  She has an attentive, wealthy family with servants gathered around her.  The servants from the house were sent out to the road again to find out what has delayed Jesus. When they got to the crowd, they expressed anger that Jesus had spent so much time speaking to an unclean, poor woman.  When he entered the house he said to the weeping household, “Do not weep; for she is not dead, she is sleeping.”He took her by the hand and said, “Child get up!”  He then directed them to give her something to eat.  Her parents were astounded that she had been healed.

Why was the hem of the garment such an important part of one’s clothing? 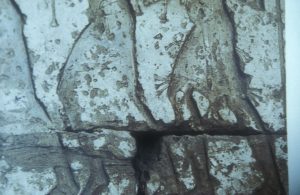 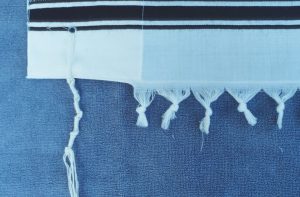 Luke 8:44 mentions that the unclean woman wanted to “touch the fringe of his clothes.” Coming off an ancient loom, the fringe of the garment was the easiest part to color and decorate with a series of various knotted tassels.  The left-hand photo from Old Testament times shows a relief of the bottom portion of a garment hanging below the knees.  The tassels are more visible on the figure on the right, where there are three clusters of three knotted decorations.  Numbers 15:37-38 gives us the tradition of hem fringes for the ancient Hebrews.  The Lord said to Moses: “Speak to the Israelites and tell them to make fringes on the corners of their garments throughout their generations and to put a blue-violet   cord on the fringe at each corner.”  Because the tradition was to be “throughout their generations,” to this day orthodox Jews add special fringes (tallit) to their inner garment and to the corners of their prayer shawls (symbolic of their outer garments).  The right-hand photo shows a close-up of the modern shawl fringe with one of the many-knotted tassels hanging from it.  Note that the biblical instructions mention a blue-violet chord at each fringe corner.  The Hebrew word (tehelit) is today normally translated blue but probably in antiquity referred to a reddish-blue violet color we will discuss later.

Our new exhibit is the first of two wall-mounted cabinets 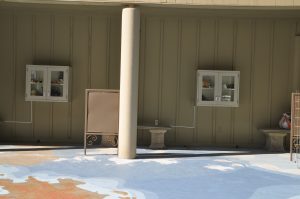 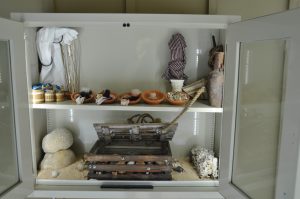 The Mediterranean Courtyard is the setting of these two electrified wall mounted steel cabinets with glass doors.  Notice they are displayed in the shade of a protective colonnade surrounding the Mediterranean (note a portion of the blue sea the other side of southern Greece painted in the left-hand photograph).  We selected two of the most important products of this ancient sea in antiquity:  the purple dying industry in the left-hand cabinet and the salting fish industry in the right.  Archaeological excavations in the last decades have discovered hundreds of purple-dying instillation workrooms and literally thousands of salting fish installations around the shores of the Mediterranean Sea.  We are working on the salted-fish exhibit and will report on it and its implications to interpreting ancient stories as soon as we are able to complete it and share photographs in a future newsletter.  The right-hand photograph shows you the interior of the purple dying industry cabinet.  Notice it is well-lit from within.  The lower shelf shows a sea-bed reconstruction of a crate with spaced lathes allowing murex snails to approach it from the outside.  Note that a rope is attached to it in order to draw it upward (with captured murex snails) to the surface.  The upper shelf shows a scene on the pier illustrating steps for refining the purple dye and containers of dyed fabric on the left. 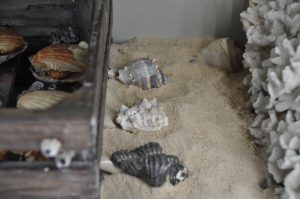 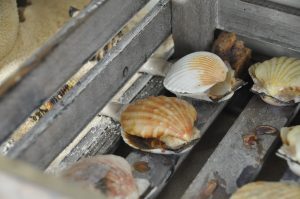 The mid-First Century writer Pliny the Elder wrote a “Historia Naturales” while residing in Naples, Italy.  In it he describes in great detail the process of making the purple dye.  The left-hand photo of our exhibit reconstruction shows Mediterranean murex snails approaching the crate which has been lowered to the sea-bed and filled with organic “bait” as an attraction.  It is left sitting there for several days.  Note their extended muscular snail “foot” is reaching through openings in the slates.  The right-hand photo reveals that live clams and scallops have been placed just inside the openings.  When the murex snail extension reaches them, they clasp shut on the “foot”, and capture them (two captured snails are pictured here.)  After a period of time, the “fishermen” from above raise the crate which has dangling murex snails hanging from it. 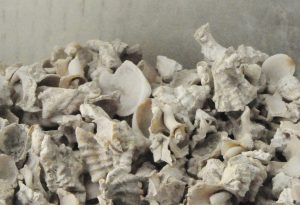 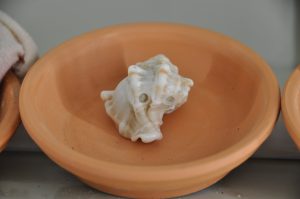 The demanding need for purple dye caused an over-catch of murex snails in the Roman Period.  This occurred because the interior hypobranchial gland which produced the purple dye was reached by crushing the snail shell.  Large amounts of crushed snail shells can be found around early archaeological industrial sites.  Some of them are on display in our exhibit.  As the number of murex snails decreased, the cost of the purple dye inflated.  Pliny describes a complicated process which was developed that would not harm the murex snail.  This is pictured in the right-hand photo of an ancient murex snail.  Note that you can see two harvest and drilling attempts visible in previous years of growth in the snail shell.  If one looks carefully, healed calcium growth can be seen which sealed the previous drill holes.  These holes were placed exactly above the outward-spiraling growth of the purple-producing gland.  With small implements the dye was squeezed and a small amount of dye was extracted.  This shell reveals that the snail must have died before workers could drill a third year’s attempt at extraction.  It was this complicated process that made the cost of clothing dyed from it so expensive: 1) one had to first build and bait the crate; 2) it then needed to be lowered to the sea bed; 3) after catching the murex snails they had to be raised and kept in salt water for a number of hours for work; 4) then came the drilling and dye extraction; and 5) the snail needed to be re-introduced down in the sea-bed.  This process would need thousands of snails to produce one small vessel with less than a pint of dye.

Three varieties of Mediterranean snails and their colors and expense 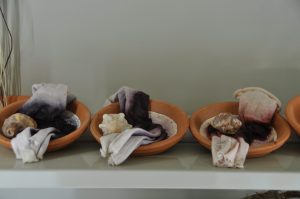 Words for ancient colors are difficult to translate accurately into the modern world.  An exception occurs if the ancient description mentions some specific object which we also have in our world.  When Pliny described the most popular color of murex snail purple dye, he said it looked like the color of coagulated blood (#1 below).  The main colors and their snails found from the beach of the archaeological site of Dor on the Israeli Mediterranean coast are pictured here (from right to left):

The expense of garments dyed these various colors of purple is given to us by Roman government sources attempting to limit the inflationary cost due to the rarity of the snails.  Only these sea snails produced an indelible dye that would not fade in the sun.  Mulberry trees produced an inexpensive vegetable purple dye, but its garments easily faded.  Believe it or not, a wool or silk robe could cost as much as $50,000 – $100,000!  By the 5th Century CE, a synthetic dye was discovered and the price bottomed out.

Interesting note: Because the word blue was a blue-violet color, western cultures have a phrase “royal blue”.  Even our wedding tradition, “Something old, something new, something borrowed, something blue,” meant something expensive.

A closing thought on our opening story about the woman who wanted to touch the fringe of the hem of Jesus’ garment:  Jesus was willing to stop while being rushed to the home of a wealthy, religiously pure male’s house in order to spend time talking to a poor, religiously impure female who reached out to touch the symbol of clothing which stood for one’s place of value in her world.