Where does Jesus get his notion of servant-king?  He gets it from scripture.  Kings are to be servants.  The two on the road to Emmaus were in despair because the person they thought was to be king was killed by the very Romans he was to overthrow.  The stranger walking with the two reminded them that scriptures said Messiah would suffer many things.  The notion of servant Messiah is a Hebrew notion.  God did not want the people to have a king.  God wanted to be their king.  We get these images in the temptation of Jesus to be a king who would gather to himself.  “The king will take your sons into the army; the king will take your daughters to be servants in his household, and the king will take your flocks and fields.”  Pottery has been found in many of the towns of the old temple period with the inscription on the handle “La Melech” which means belonging to the king.  This is where you put a portion of your field that went to the king’s palace.  The people wanted a king because everybody had a king. 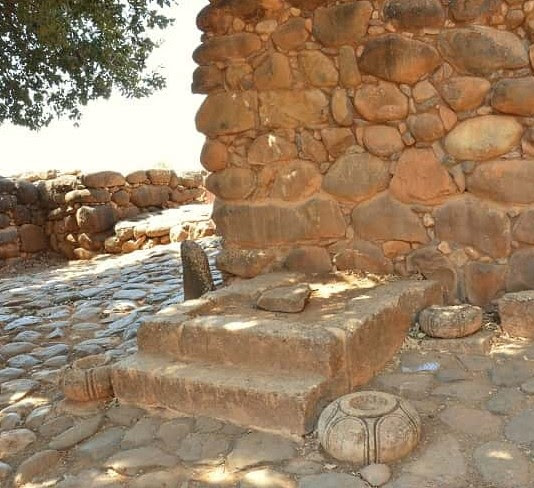 The remains of a king’s throne were found just outside the gate at tel Dan.  Judges and kings sat at gates.  All that is left is what was used for a wooden post for a canopy over the throne and a footstool.  The Assyrians stole the throne.  The people bowed and kissed the king at the footstool of the throne.  Servants kiss their master’s feet, equals kiss on the cheek.  Kings glorified themselves on their palace walls with images of people bowing down to them.  The walls at Nineveh have pictures of captured Jews bowing down to Sennacherib and pictures of booty being gathered from countries they have sacked.

Saul was king because he stood head and shoulders above the rest of the Israelites.  The people chose Saul to be their king.  He was big and impressive.  The Bible says of King Saul, “When you were strong in your own eyes I could not use you.”

Samuel went to Bethlehem and asked Jesse to bring out his sons.  Jesse brings out four hunk sons on steroids.  Samuel went down the line and says, “No” to each one.  Samuel says, “Is this all?”  Jesse says, “There is the runt of the litter, but he is out in the wilderness with a few sheep.”

This is the theology of a king in scripture that influenced Jesus’ notion of king.  There is no better experience and job description than that of a shepherd for being a king.  A shepherd has to keep his eye on the weakest sheep, and he has to constantly count the sheep to keep track of them and to look for any that have strayed.  David was brought to Samuel.  David was a short, scrawny, little whippersnapper.  When it says David had a ruddy complexion it would have been understood that he freckled easily in the sun. 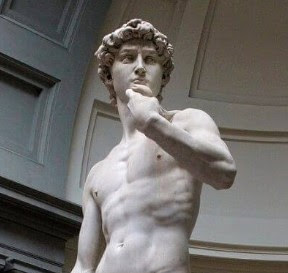 In religious art, David is a combination of Zeus and Mercury.  In the Bible, he is a scrawny little kid.  The human notion of David is that he has to be big and impressive.  No one would want to go see a statue of a scrawny little David in Florence, Italy!  The theology of the king is found when they bring David.  Samuel explains why he did not choose one of the big hunk sons.  “People look on the outside, God looks on the inside.”  This is the key to recognizing Jesus as king.  People look on the outside.  We will find nothing in the lifestyle of Jesus that would be in keeping with the human notion of king.  If we look at the heart, we will see the king and the kingdom of God.  In Renaissance art, the determination and strength shown in the eye of David, in Michelangelo’s statue, was an appropriate image of David against Goliath – the individual against society.  Some of Goliath was state and some of it was church.  Michelangelo’s David is carrying the big stick for the story of David and Goliath. 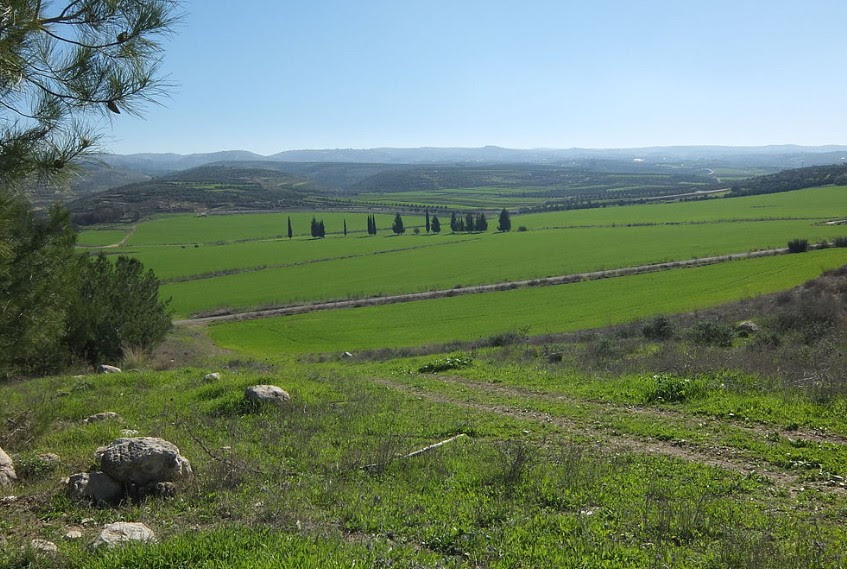 David went to the Elah valley (pictured here after the spring rains) where his brothers were fighting the Philistines with Saul where they had been camped for forty days.  The Philistines were camped at the hill of Socoh and Saul was across from them.  When David got to the camp with some cheese and bread for his brothers, he started asking questions.  David asked, “Who is this uncircumcised Philistine that he should defy the armies of the living God?”  Rumor of this came to Saul’s tent and Saul invited David in.  David said, “The Lord, who saved me from the paw of the lion and from the paw of the bear will save me from the hand of this Philistine.”  David said he would fight the Philistine.  Saul wanted David to put on his armor.  But when David put on the armor and turned around, the armor did not move!  David said he could not wear it.  Saul was head and shoulders above the Israelites and David was a little squirt.

David went down to the Elah brook and picked up five smooth stones.  The flash floods over the limestone make the rocks roll there, and they become smooth.  David only needed the first stone.  Some scholars question this story because it is such an enjoyable story to read.  They believe it is more a theological statement about David.  Evidence that it may be an historical memory is that without that story there would be no explanation for the jealousy against David that obsessed Saul for the rest of his life.

It is interesting that Samuel went to Bethlehem looking for a king but found him with sheep.  The magi came to Bethlehem looking for a king.  The king is found in unexpected places and the king’s activities are found in unexpected places.  These stories are for the theology of the king.  1 Sam 16:7 ” . . . For the Lord sees not as man sees:  man looks at the outward appearance. but the Lord looks at the heart.”