Samuel went to Bethlehem looking for a king and found David, a scrawny boy who kept the sheep.

Let’s look at the kingship more in relation to David.  David spilled innocent blood when he killed Uriah the Hittite because of his lust for Bathsheba.  Nathan would not anoint David and David was not allowed to build the temple.  Someone who was responsible for innocent blood being spilt could not build the temple and so David’s son Solomon built the temple.  Most likely David’s war booty facilitated Solomon’s having funds to build the temple.  Solomon built the temple outside the northern wall of the City of David.  There are no actual remains of the first temple.  David built a fort and Solomon further fortified it.  Solomon was a great builder.  During this period the nations surrounding Israel were weak, and we should not be surprised that the people would build structures to glorify strong kings. 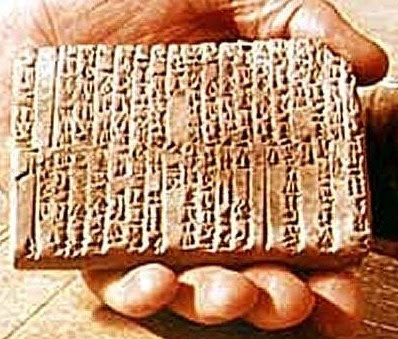 In antiquity, vassal treaties were created between strong nations and weaker nations when kings would give their daughters in marriage to another king. (This picture is of one of the tablets found in Ebla, Syria, several of which were vassal treaties.) Theoretically, one would be less likely to attack a country if you were likely to lose one of your daughters.  Solomon had four hundred such vassal treaties and vassal treaty wives.  They all brought their palace entourages as well as their pagan religions with them.  I imagine when Jesus was looking at the little wild flower in Galilee he was thinking, “Even Solomon in all his glory was not clothed like one of these little flowers.”  You must keep your perspective and not glorify the power of texts in scripture.

God reluctantly agrees to let the people have a king.  There are two conditions, however, and this is the theology of the king.  The king must have two titles – shepherd and father.  It is very important to note that the plural of “father” in Hebrew is the word for “parents.”  The plural of the word for “brother” in Hebrew is the word for “brothers and sisters.”  And you always use the plural form of the word when speaking of someone who is powerful.  When one speaks of a king or God in the Bible, the plural form of the word “father” is used and it does carry with it the feeling of “parent.”  The point here is that the title of the king must be “care giver”.  What God is trying to say through the prophet Samuel is that the king must be a responsible, loving, care giving shepherd.

I believe Ezekiel 34:1-16 influenced Jesus in the wilderness.

The word of the Lord came to me:  Mortal, prophesy against the shepherds of Israel; prophesy, and say to them – to the shepherds:  Thus says the Lord God:  Ah, you shepherds of Israel who have been feeding yourselves!  Should not shepherds feed the sheep?  You eat the fat, you clothe yourselves with the wool, you slaughter the fatlings; but you do not feed the sheep.  You have not strengthened the weak, you have not healed the sick, you have not bounds up the injured, you have not brought back the strayed, you have not found the lost, but with force and harshness you have ruled them.  So they were scattered, because there was no shepherd; and scattered, they became food for all the wild animals.  My sheep were scattered, they wandered over all the mountains and on every high hill; my sheep were scattered all over the face of the earth, with no one to search or seek for them.

Therefore, you shepherds, hear the word of the Lord:  As I live, says the Lord God, because my sheep have become a prey, and my sheep have become food for all the wild animals, since there was no shepherd; and because my shepherds have not searched for my sheep; but the shepherds have fed themselves, and have not fed my sheep; therefore, you shepherds, hear the world of the Lord:  Thus says the Lord God, I am against the shepherds; and I will demand my sheep at their hand, and put a stop to their feeding the sheep; no longer shall the shepherds feed themselves.  I will rescue my sheep from their mouths, so that they may not be food for them.

For thus says the Lord God:  I myself will search for my sheep, and will seek them out.  As shepherds seek out their flocks when they are among their scattered sheep, so I will seek out my sheep.  I will rescue them from all the places to which they have been scattered on a day of clouds and thick darkness.  I will bring them out from the peoples and gather them from the countries, and will bring them into their own land; and I will feed them on the mountains of Israel, by the watercourses, and in all the inhabited parts of the land.  I will feed them with good pasture, lie down in good grazing land, and they shall feed on rich pasture on the mountains of Israel.  I myself will be the shepherd of my sheep, and I will make them lie down, says the Lord God.  I will seek the lost, and I will bring back the strayed, and I will bind up the injured, and I will strengthen the weak, but the at and the strong I will destroy.  I will feed them with justice.

The prophet was against the king.  The title of the king in the texts is “shepherd of Israel.”  Priests are also called shepherds and fathers.  People responsible for others should be shepherds.  From this idea we get the title “pastor.”  Everything in Jesus’ lifestyle is that of the good shepherd in contrast to the powerful king.  A popular paperback in the first century, “The Assumption of Moses,” says, “King Herod subjugated the people to worse bondage than they knew under the pharaoh of Egypt.”  This is the notion of king that was prevalent in Jesus’ day.  But the notion of being a shepherd and Servant Messiah is in scripture.

It was easy for the flock to be in danger in the land because of the rugged landscape and cliffs and caring shepherds were needed to watch over the flock.  Wild animals were also of concern with the main danger at night when predatory animals were out because it was too hot to go out in the day.  The flocks were kept in sheepfolds at night and were guarded.  At the encampment the sheep were kept in the center and a circle was made of rocks to make a sheepfold and then the tents were in the outer circle.  Usually the shepherd had a sheepdog.  When a predatory animal came around the camp at night the sheepdog would bark and alert the shepherd.  A cave or sheepfold that has been built in a strategic place would be used for the sheep if the shepherd were away from the encampment area.  The sheepfold also had sharp sticks and thorns on top.  A fox would not go over the thorns.

The word for shepherd was not a gender specific word in antiquity.  There were actually more shepherdesses than shepherds.  These vocations are family responsibilities.  Usually the men did the upper bodywork of plowing while the women did the bending over work of pruning, hoeing, and weeding.  If a flock were taken just a day’s journey and returned to the encampment the same day, shepherdesses went with the flock.  For overnight grazing journeys, shepherds took the flock.  Shepherd and father were also titles for priests.  If you were a leader in Israel, whether king or priest, you would be called shepherd or father.

The notion of what a shepherd does is what the king should be like.  If you are looking for a powerful army and military border image for king, you will miss Jesus.  If you remember the theology of the king from the Hebrew Bible, you will see an example of a caring shepherd-king in Jesus’ relationships in the healing stories.  In dangerous areas, the shepherd actually sleeps in the door of the sheepfold.  The saying “I am the door” means I invite you in and will care for you and include you.  Jesus said “I am the door; I am the good shepherd” to a blind man who had just been kicked out the door of a synagogue by bad shepherds of Israel (John 9 & 10).

These are ways that one could see that Jesus was the servant king, the shepherd king, the caregiving king, and the Messiah king after all.