Poor people in antiquity rarely could afford to eat meat.  This delicacy was mainly reserved for weddings or religious feasts.  Bread, vegetables and fruit were the major staples.  If, however, one lived along the shoreline of a body of water, fish consumption became one’s main staple.  In days before refrigeration, finding a way of preserving fish became a very important industry.  Fish preservation made it one of the most common foods eaten by many people in antiquity.  Even excavations in landlocked cities like Jerusalem have found evidence of fish being available for purchase.  The salted fish exhibit at the museum shows how preservation was done in ancient times. 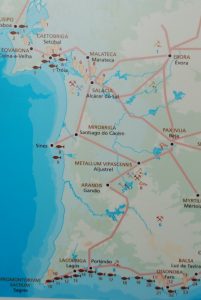 This map shows twenty-four archaeological fish-salting industrial sites, pictured with a fish symbol, along the Atlantic and Mediterranean coast.  These two dozen locations are limited to the south-west shores of modern-day Portugal from Lisbon to the Rock of Gibraltar.  Can you imagine the number of sites around the entire Mediterranean?  The map photo labeled site #7 shows the location of the ruins of Troia which we were able to visit on our Biblical Resources trip to Portugal and Spain. 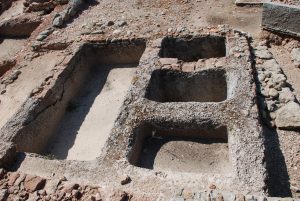 The photo on the right shows a rectangular Troia fish basin for receiving a recent catch of fish. Next to it are three of almost one hundred square plastered salting vats surrounding the village which we will discuss momentarily. 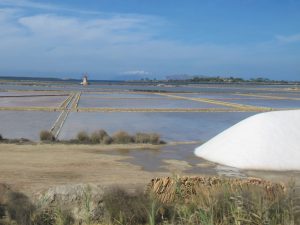 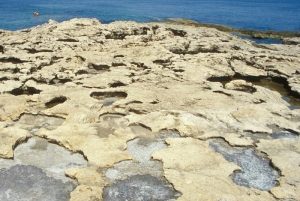 The Mediterranean Sea has shorelines with lagoons which could be developed into salt evaporation pans.  Pictured here on the left is the beautiful lagoon of Mozia Marsala in western Sicily.  There is evidence of Phoenicians and Romans harvesting sea salt here in antiquity.  These still- functioning pans and dykes are reflooded during high tides, and even with some assistance by a wind-mill, seen in the distance.  A mound of sea salt, pictured on the right, is gathered for shipping to other industrial fish-salting sites around the Mediterranean.

Where there are no shallow shoreline estuaries, rocky steep hills served as a place where sea salt could be produced.  The photo on the right shows multiple basins cut out to receive the splashes of waves during strong winds.  After evaporation by the sun, the sea-salt (see foreground) could be collected.

The method of salt preservation of fish 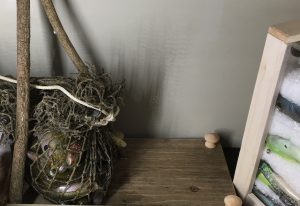 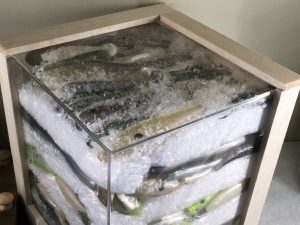 Fish would be caught in a net, then placed in salt vats for preservation.  Within the salt vats, alternating layers of fish and Mediterranean salt would be placed (see the cross-section in the transparent vat model).  The fish would remain fermenting within the basin for one to two months.  Though difficult for most people to appreciate, the innards of fish were also included within the basins, making a popular solution of fish sauce known as garum.   This was used to season many cooked foods and, believe it or not, even wine (gag!).  Many shipwrecks have been found with amphorae jars, the most common style jar for storing and shipping garum, wine and olive oil. 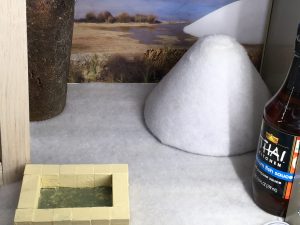 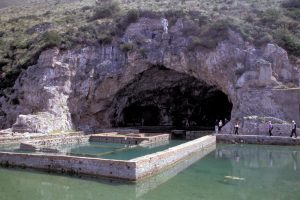 The model shows a modern jar of oriental fish sauce on the right and a small rectangular fish tank in the foreground of a salt flat.  Wealthy people could afford to build a piscina for storing live sea fish.  These were placed in places which could have continuous circulation of fresh sea water from new tidal flows.  Photo #8 shows an elaborate piscina at the palace of Emperor Tiberias on the Italian shoreline north of Naples.  Note it has an island triclinium banquet table which would have been surrounded by colorful fish swimming around it.  In the center background of the picture is a cave in a cliff perhaps for extravagant dramatic or musical entertainment.  Those readers who have been to Israel probably recall seeing the large piscina at the shore of Caesarea, which supplied fresh fish for the royal palace of the Roman Proconsuls of Judea and Samaria. 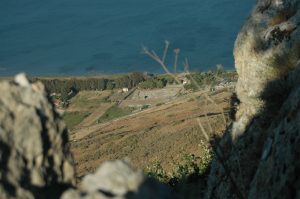 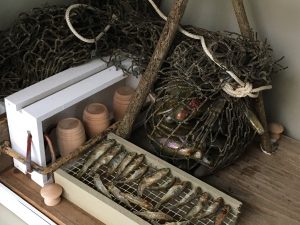 Even the Sea of Galilee had a city with a fish-salting industry.  Its Hebrew name was Magdala, traditional home of Mary Magdalene.  The historian Josephus informs us that the town’s name in Greek was Tarichea, which means “salted fish.”  The salted fish from Magdala were exported and could even be purchased in distant Rome.  The sources for its salt could not be the fresh-water Sea of Galilee, or the Dead Sea (because its salts were too bitter).  The salts used in Magdala would have been imported from some of the many salt flats around the Mediterranean (as in photo #1).  This view of the Magdala shore, in the photo on the left, is from the top of the nearby 1,500 foot-high Arbel cliff.

Many varieties of fresh water fish were found in the Sea of Galilee in antiquity, such as Talapia, Barbels, Catfish, and Sardines.  If the nets of fishermen brought in a good catch of more fish than they could sell and eat in one day, they would sail to Magdala/Tarichaea to have them placed in vats and salted before they spoiled.

For our reflection, I would like to comment further on Sardines, one of the smallest edible fish.  There are both salt-water and fresh-water varieties.  Though small, even today they make up over half of the commercial catch in the Sea of Galilee!  Because they were small, they were easy to pickle in brine and vinegar and store in narrow-necked amphora jars for shipping.

Being a small variety of fish, they were also good for salting and drying on nets placed in direct sunlight.  The photo on the right from our exhibit shows our model of a pier with an upper net full of large Mediterranean fish to be placed with layers of salt in a vat.  The foreground also shows 18 small sardines spread out on a net (raised above the ground to avoid possible ants) to dry in the sun.  Compare their size to the main fish above them hanging in the main net.  Being small and thin, sardines would have dried quickly and could easily been turned over for drying the second side.  Within a couple days there would not have been any further moisture within them, thus making them perfectly preserved for longevity and easy dry transport.

Our text for reflection is the famous Gospel story of the multiplying of the loaves and fish.
The story is in the three synoptic gospels of Mt 14:15, Mk 6:30, Lk 9:10.  The Gospel of John adds that crowds followed Jesus from the Jewish shoreline several miles to the other side of the sea.  The day was now far spent in the afternoon and the crowds were hungry.  Jn 6:9 adds that there was a lad there with five barley loaves and two small fish.  Only John mentions that the fish were small.  This snack may have been five rolls and two dry, salted sardines in a toga pocket.  This would have been far easier to carry several miles than a jar of fish in garum sauce!  In spite of his lunch being so small, one cannot help but commend the willingness of the boy to give up what he had and share it with others.

It seems the gospel writers wanted to point out how insignificant this lunch was.  We are told that it was Andrew who found the boy.  Isn’t it great that he wasn’t embarrassed to even mention to Jesus what a small gift this lunch was?  As with our Widow’s Mite donation program we introduced two months ago, Jesus was remembered as a teacher who was happy to receive the young boy’s two, dry, shriveled up, smelly, small sardines.  Did I perhaps overstate my point with these five adjectives?  Let’s not hesitate to give even our small talents to God.