Praying in the Character of Jesus – Simon

Last time we talked about how Jacob’s character changed as he wrestled with men and then wrestled with God.  We have another story of a character change in Simon who becomes Peter.  Simon’s hometown is Bethsaida, “house of the fishermen,” which was at the Jordan inlet to the Sea of Galilee.  This inlet brings in a lot of organic material.  Fish love to feed at the mouth of the Jordan and it is a good place for a fishing village.

Simon was a fluttering dove, jumping from one idea to another.  He never stayed at any place or with any project for very long.  We find Simon, particularly in Mark’s gospel, to be refreshingly human with a tilted, dented halo.  There are more details about Simon, the buffoon, in Mark than in any of the other Gospels.  The thing that is most interesting about Mark’s view of Simon Peter is that most scholars believe Mark is the memory of Simon Peter.  It is wonderful that he could be so open about those days when he only opened his mouth to change feet.  That he said everything wrong all of the time is such a refreshing aspect of scripture.

Isn’t it wonderful the Lord uses Simon?  Sometimes you wonder why he was a fisherman, because many times we are told they were not catching anything.  But they are called just as they bring in the miraculous catch of fish and they follow Jesus.  Simon is not the leader of the twelve, he is a representative of the twelve.  He is the kind of student that teachers love.  He is not afraid to guess even if he doesn’t know the right answer.  Jesus says, “I want you to forgive one another.”  Simon asks, “How many times, Lord, seven?”  The rabbi said three times so Simon doubled it and threw in an extra one for good measure.  “No, Simon,” Jesus answers, “seventy times seven.”

The disciples follow Jesus up through Caesarea Philippi.  Out of his earshot they have al been discussing who they think Jesus is.  Later, Jesus asks them a two-part exam question:  “Who do people say that I am?” and “Who do you say that I am?”  When he asked the second question the representative of the twelve said, “You are the Messiah of God.”  Jesus had not said that overtly to them.  He was an induction teacher – he allowed them to go at their pace and was patient with them.  He allows you and me to do the same, he is patient with us.

But did Simon have any room in his concept of Messiah for a suffering servant King?  If the Messiah was supposed to show us what God is like, then the Messiah ought to be able to identify with the suffering of the world.  So, checking Simon’s concept of Messiah Jesus says, “You are right, Simon.  Now I must go to Jerusalem and suffer many things.”  Simon says, “No, Lord.  Messiah doesn’t suffer.  Messiah equals king . . . power . . . might . . . no Romans.”  This means, of course, that it is possible to pass the exam and fail the course!  It is possible to have the right words and the wrong understanding of those words.

The whole journey to Jerusalem, as Jesus and the disciples com down the east side of the Jordan and go up to Jerusalem, the disciples are arguing who is the greatest.  Three times they argue who is the greatest.  They don’t do it in front of Jesus, ,they walk slowly and he is ahead of them.  When they get to camp Jesus says, with a sad twinkle in his eye, “What were you guys talking about back there on the road?”  They didn’t want to tell him, because they were arguing over who was the greatest.  They probably were saying, “Jesus is going to be king – I get Herod Antipas’ territory; I get Herod Phillip’s territory; I get Pontius Pilate’s territory.”  They are falling, stumbling the whole way to Jerusalem, just like you and me.  They are keeping little children away from Jesus.  They are unable to heal in a difficult situation.  Jesus has to remind them that some things come only through such prayer and fasting.  They want to call down fire from heaven on villages whose occupants don’t believe.

Then we have the scene of the Last Supper.  As the disciples enter the room of the Last Supper, they are again arguing who is the greatest.  I wonder who started that argument.  Probably Simon.  In the order of the reclining tables, such as was at the Last Supper, the person sitting in the last seat, the lowest seat, is supposed to do the foot washing.  That no one is offering to wash the others’ feet probably means Simon is in the place that should do it.  Our main evidence that Simon is in this place is that he is the only one who refuses to let Jesus wash his feet.  This probably means that he is the one in the seat that was supposed to wash feet.

At Gethsemane, when Jesus asks them to pray with him, Peter, James, and John are sawing logs over by an olive tree.  They are falling all over each other because they are so tired, it has been a busy week.  Despite Jesus’ request, they cannot stay awake. 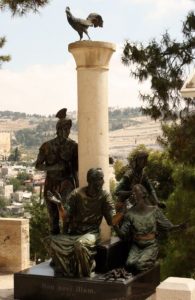 When Jesus is arrested Simon follows him to the house of Caiaphas where the voice of a little servant girl catches him off guard.  She says to him, “You don’t sound like you are from these parts.  Are you from up north?”  His Galilean accent betrays him.  In that terrible timing that sometimes characterizes God’s dealings with us, Simon shouts out, “I don’t even know who the Nazarene is.”  Just as he does, his rabbi, his best friend is let through the courtyard.  Simon goes out into the night and weeps bitterly.  There, after the rooster crows, the gospels draw a gracious veil of silence.

We don’t have Peter at the cross because he is in such despair.  But in the resurrection stories he is not going to be Simon.  He is going to begin to become Peter.  What helped him change was to realize how judgmental he had been with others.  He recognized how puffed up he himself was as Simon, and admitted how unwilling he was to wear a servant’s towel and wash his brothers’ and sisters’ feet. 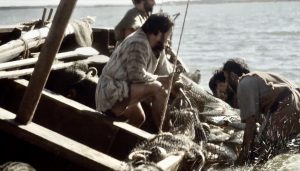 In the resurrection story in John 21, Simon and the others are out fishing by the Sea of Galilee when a stranger standing on the shore yells for them to throw their nets on the other side.  They do so and bring in a big catch of fish.  John says to Peter, “Do you suppose it could be the Lord?  Remember that big catch we caught when he first called us to follow him?”  Peter is so excited he jumps into the water and runs up to the shore.  There the resurrected presence of Christ is cooking some small fish and some bread over a fire.  Then Peter hears three words he thought he would never hear again:  “Simon, follow me.  I understand places like Caiaphas’ courtyard.  I will help you pick up the pieces again.  I will help you become a new person.”  He is still Simon and the Lord addresses him as Simon.

In the book of Acts we follow Simon’s amazing story.  He has learned to love his crooked neighbor with his crooked heart.  He has seen the depth of things that needed to be changed in his own life.  He is no longer going to be judgmental of others.  He is not going to want to call down fire from heaven on anybody.  He is a new person.

At Caesarea Philippi, before going to Jerusalem, the Lord said to him, “Simon, you are going to be Peter.”  Jesus saw him as who he could become.  His character would change, he would be Peter the rock.  This fluttering dove that jumped all around on his opinions, who was judgmental of others and unable to stick with things, becomes the glue that holds the church together.  Acts 15 tells us that he kept the church from splintering.  Who would have guessed Simon could keep the church from being split?  Actually, if Simon had been there instead of Peter there likely would have been a church split, and there probably would have been a third faction that had only Simon in it!  There was an amazing change in his character.  So his name changed to Peter.

Christ’s character was not to judge or categorize or exclude, as Simon and the eleven were prone to do.  It was to include.  He was the good shepherd who looked for the lost sheep and for those in the fold who were weak.  He included, not excluded, the whole flock – the down and outers, the unnamed woman, Jairus the ruler of the synagogue.  No matter what our circumstances, whether we are down or up, we can know God’s love for us.  Christ is always looking for the lost sheep and making a sure sheepfold for us.  Think of how many ways we can follow the character of Jesus and do this for others.