In The Setting of Corinth, we discussed Paul’s arrival and early ministry in Corinth between 49 and 51 CE.  We discussed how the new painting of the Mediterranean courtyard in our new museum nicely shows the city’s setting at a crossroads between the eastern and western Mediterranean Sea—as well as a land bridge between northern and southern Greece.  Its large population would have been mainly merchants and sailors who were from Gentile backgrounds.  It is these folks I would like to talk about now.

I would like to discuss the main beliefs and mythological stories the inhabitants would have been familiar with in the First Century and how the beliefs of Jews and the message of Christians would have contrasted with the beliefs of most pagans with whom they associated.  We now know that the Christian congregation included some wealthy and influential leaders of Corinth who certainly would have been educated in Greek mythology. 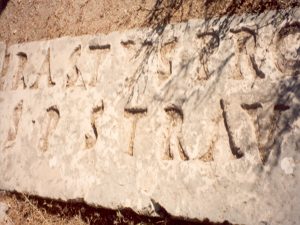 This photograph shows what is known as the Erastus Inscription, found in the plaza of the smaller Roman theater of Corinth.  The beginning “E” (upper left) is not complete.  Small dots separate the words:

Paul ended his letter to the Romans (written from Corinth) by sending greetings from some leaders of the city; (Gaius and Erastus are mentioned in Romans 16: 23-24).  There are two other occasions that someone named Erastus is mentioned in the New Testament: II Timothy 4:20 and Acts 19:22. We do not know for sure if they are the same person.  However, in that Paul says Erastus was the city treasurer, it sure might be one and the same person as in the inscription.  If so, it is a nice thought that archaeologists have discovered a dedication inscription that includes the name of a wealthy, generous follower of Jesus in the town of Corinth.  As we mentioned in last week’s newsletter, this letter was entrusted to the deaconess Phoebe, who carried it to Rome when she began teaching the believers there. 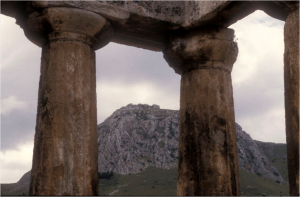 This photo shows a view of the temple of Venus/Aphrodite on top of the acrocorinth mountain citadel as viewed through three of the Doric columns of the Apollo Temple.  The earliest structure discovered at the site was the Apollo Temple dating back to the 6th Century BCE.  Seven of the original columns still stand to this day.  They are known as monolithic columns because they are each carved from a single large stone.  This was the only ancient structure still standing before the excavation began revealing the rest of ancient Corinth.  The temple localizes the mythological story of Marsyas (half man and half goat) who made the mistake of beating Apollo in a musical contest on his flute.  In punishment, Apollo tied Marsyas to a tree and skinned him alive and his flute ended up in the Temple of Apollo.  Seeing the temple of Apollo daily reminded the Corinthians of the cruelty of the gods. 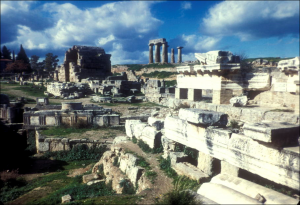 This is a view of the Corinth excavation along the north-western side of the Corinth Agora in the town center.  The ruins show several temples and monuments including the columns of the Apollo Temple on the skyline.  The excavation was conducted by the American School of Archaeology in Athens.  Many discoveries from Corinth have helped New Testament Scholars gain new insights.  Almost a dozen temples were discovered in Corinth.  Each would have had a number of stories about the god or gods associated with it.  In fact, the new insights have come to 51 chapters of the New Testament texts (Acts 18, 19 and 20:2-3 which are set in Corinth).  The Book of Romans was also written in Corinth, and I and II Corinthians contain Paul’s responses to what seems to have been five letters with questions and problems written from the Corinthians to Paul while he was teaching in Ephesus for almost three years).  The excavated ruins discovered help illustrate literally dozens of texts Paul alludes to in I and II Corinthians.

I would like to reflect for a moment on how the people of Corinth might have understood
I Corinthians chapter 13 about the characteristics of love.  One of the most important themes in Paul’s Corinthian letters is about the sin of arrogance. It is not surprising that many citizens suffer when some Heads of State are arrogant.  Some Church leaders are as well (the old English word has great visual imagery, “do not be puffed up.”) When referring to this kind of behavior being exhibited by many pagan gods, Greek historians used phrase “the hubris of the gods.”

Paul wrote the Corinthians a thoughtful poem about the true character of love as understood in the Judeo/Christian tradition. These characteristics are in contrast to the behavior of the Greek and Roman gods as believed by most citizens of Corinth.

Love is patient; love is kind; love is not envious or boastful or arrogant or rude.  It does not insist on its own way; it is not irritable or resentful; it does not rejoice in wrongdoing, but rejoices in the truth.  It bears all things, believes all things, hopes all things, endures all things.
I Cor 13:4-7

Some church leaders in Corinth were also arrogant.  In I Cor 6:12, 16-17 Paul said, “Some of you, thinking that I am not coming to you, have become arrogant.”  They were pushing their own ideas for notoriety and authority.  It was sad for Paul to see this behavior in any leader “puffed up” like this.

Note the terrible behavior exhibited by some of the gods whose traditions are associated with places at Corinth: 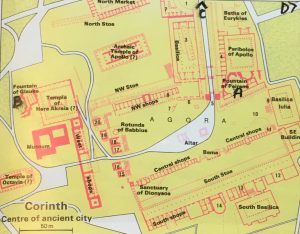 This photograph of the excavation plans illustrates just four of the locations that had tragic myths which the population believed associated with them.
A.  The Peirene Spring was the main water source of Corinth where many Corinthians went daily to get water.  As the myth was told, a Corinthian woman named Peirene had two children who were killed by the goddess Athene.  The two sea ports of Corinth were named after them.  She was so inconsolable at what the goddess had done that she cried so much that her tears were transformed into the spring.
B.  The Glaunce Spring also recalls a tragic story.  A long-distance sailor named Jason sailed to the far eastern end of the Black Sea looking for the Golden Fleece.  There, the king’s daughter, Medea, helped Jason steal the fleece.  He escaped back to Corinth where he found a new girlfriend named Glaunce.  Medea, who became jealous, gave her a beautiful gown which caused the wearer to burn.  Seeking relief, Glaunce jumped into the spring where she drowned trying to seek relief.
C.  This road is the main road from downtown Corinth leading north to the sea port of Lechneam which was named after one of Peirene’s children killed by the goddess Athene.
D.  The road marked “D” leads northeast to the second port of Corinth, named Cenchreae, the second child of Peirene who was also killed by the goddess Athene.

Many more sites and temples in Corinth honor deities whom you would not want to be your next-door neighbors!  With stories like these about the gods of Corinth, one wonders if the people there were really happy.  Greek and Roman Mythology indicates that the gods were continually in conflict with one another.  Did the Corinthians believe that their gods loved them? I imagine that many of the more sensitive citizens of Corinth became disgusted with the behavior of these gods in their mythologies.   The insensitivity of the gods certainly helps us understand why many Romans were gathered to early Christian house-churches to hear a more meaningful message of encouragement and a deeper level of worship.  The more we learn about cities like Corinth, the better we can understand how radical and refreshing was the message Paul preached about the light and love of God seen in Jesus Christ.  The discovery of a popular early Christian oil lamp has been found which summed up this theme with an inscription near the flame of the wick, “The light of Christ shines on all beautifully.”