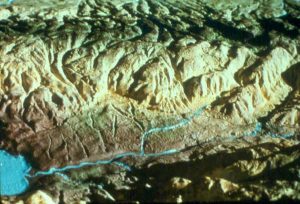 This photo shows a view looking across one of our own relief maps showing the north end of the Dead Sea on the left and two nearby oases.  Just below the Jordan inlet to the Dead Sea is Bethany of Jordan, and a bit further above the Jordan the green oasis of Jericho can be seen.  The journey from Galilee to Jerusalem (Matthew 19:1-20) follows the desert road that would have joined these two oases.  Jericho is a good guess as to where Jesus may have met the rich young man.  Mark 10:25 mentions that they crossed the Jordan and entered Judea.  As Jesus was setting out on the journey, a man ran up and knelt before him. Jericho was a wealthy city, with five palaces belonging to the Herodian dynasty.  It is also the setting of a rich tax collector named Zacchaeus meeting Jesus.  Here is a summary of their conversation:

He asked, “What must I do to inherit eternal life?”
“You know the commandments, keep them and you will be fine.”  He said, “Which ones?”   Jesus said, “If you wish to be perfect, go, sell your possessions, and give the money to the poor, and you will have treasure in heaven; and come follow me.”  When he heard this, he went away grieving because he had many possessions.  When the disciples heard this, they were astonished, and they said, “Then who can be saved?”  But Jesus looked at them and said, “for mortals it is impossible, but for God all things are possible.” Then Jesus said to his disciples, “Children, how hard it is to enter the kingdom of God!  It is easier for a camel to go through the eye of a needle than for someone who is rich to enter the kingdom of God.” 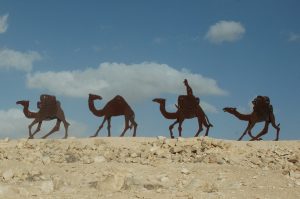 There are two main ways of interpreting this saying.  The traditional way, found in many translations, is to say Jesus was referring to a camel.  After all, they are traveling on a desert road where one would begin to see camels carrying trade goods from Trans-Jordan and Arabia, crossing to Jericho and onward to emporiums on the Mediterranean coast.

Let us look for a moment at the three ancient languages behind the text.  There were two common languages used by everyday Jews in the time of Jesus.  Women (who generally did not attend synagogue school) would have been fluent in Aramaic.  They would of course know some Hebrew prayers and hymns from the synagogue service.  Religious men would also have known Hebrew.   Business men and women in the Eastern Roman Empire would also have known Greek.  A major Aramaic text of the Gospels, known as the Peshitta, renders camel as gamla.  This word is also true in Hebrew.  As was their tradition, the vowel sounds were assumed and not written; so the word would have been spelled simply as gml.

The right-hand photo shows a metal covered city gate which has within it a smaller door enabling a more restrictive entrance. 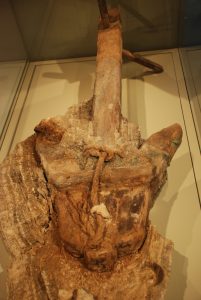 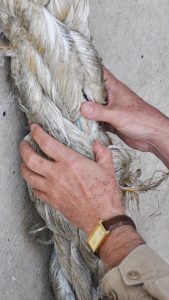 The pictures above show an anchor from the dead sea and a mooring rope from a large ship.  Notice how large the rope is compared to the man’s hands.

If the context of the word in the text is riding or carrying a burden, then this lets the translator know the traditional translation of camel would be preferred.  For this reason, some Gospel commentators have wondered if a narrow gate, or small door within a gate was known as “a camel’s eye” because the camel would need to be stripped of its burdens in order to pass through it.  However, it is not an insignificant observation that there exists no ancient source that mentions any gate or door ever being called a “needle’s eye.”

In both the Aramaic and Hebrew languages, “gamla” can also mean a “large rope”.  If so, Jesus’ saying in Luke 18:25 and Matthew 19:24 could be translated, “Again, I say to you, it is easier for a large rope to go through the eye of a needle than for someone who is rich to enter the Kingdom of God.”  If the context of the word is threading something through the eye of a needle, it might more correctly mean a large rope to go through a needle’s eye.  We would not need to change metaphors to begin speaking about camels.

There are two different Greek words for Camel or Large Rope 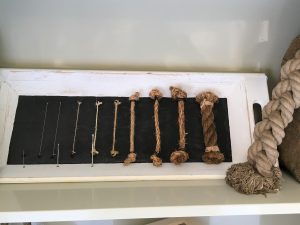 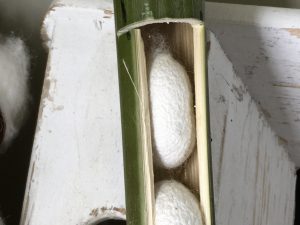 Though camel and large rope are spelled the same way in Hebrew and Aramaic, in the Greek language the words are spelled differently.  Not only does the Greek language have a larger vocabulary than Aramaic and Hebrew, it is spelled with vowels, which can distinguish between words with the same consonants.  The ancient “g” normally becomes a hard “c” in Greek.

Archaeological discoveries have revealed that ancient people were well-versed in using many different materials for weaving and tying.  The left photo above shows threads made of silk and cotton, strings of linen and ropes of cactus fibers.  The right photo shows our museum collection of some silk-worm cocoons.  Ancient sources inform us that silk-worm cocoons were a carefully guarded Chinese national secret in ancient times.  We are told that someone in the Greek period was able to smuggle some of them out, live, by putting them inside a hollow bamboo walking cane, as seen in our cross-section. 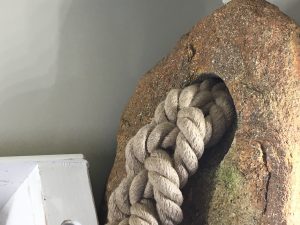 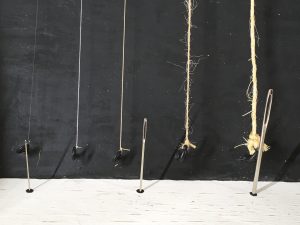 The photo on the left shows a braided mooring rope made of several large ropes.  If one looks carefully, one can see that it would take great care to thread it through an “eye” cut through a large volcanic stone set in the boulders along the Sea of Galilee shoreline.  This would surely anchor the boat securely during a storm.  That mooring ropes are also threaded through eyes makes it perhaps more likely Jesus was referring to them…particularly since a number of his disciples were fishermen.

The photo on the right shows a closeup of various threads and strings.  Three appropriately-sized metal needles are also displayed, though narrow plant thorns could also be used.  Fortunately, the dry climate of Israel and other Middle Eastern countries have preserved a number of richly decorated fabrics, though they are several thousands of years old.  Fabrics have been discovered made of silk, cotton, linen, sheep wool, even goat and camel hair.  Over 1,000 different pigments were used by fabric dyers.

Three varieties of Mediterranean snails and their colors and expense 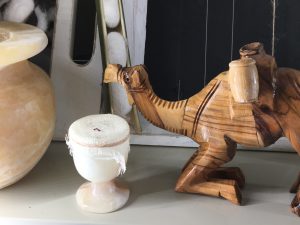 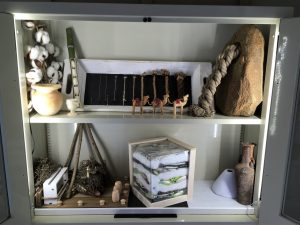 Jesus has another saying more specifically about a camel in Matthew 23:23-24. Its setting is the Jerusalem Temple courtyard area addressing some of the religious leaders of his day.

“Woe to you, Scribes and Pharisees, hypocrites!  For you tithe mint, dill and cumin, and have neglected the weightier maters of the law: justice and mercy and faith…You blind guides!  You strain out a gnat but swallow a camel.”

Jesus seems to have enjoyed giving a variety of sayings about large and small things.  (His saying in Matthew 7:5 is another example:  “. . . first take the log out of your own eye, and then you will see clearly to take the spec out of your neighbor’s eye.”)

In addition to speaking about threading something large through a small needle’s eye, Jesus spoke this parable about one of the smallest and largest animals they could see by naked eye in their day.  The photo on the left above is of a large alabaster wine container with a smaller alabaster wine cup next to it.  The top of the wine cup is covered with a cloth strainer which has captured several small gnats (look carefully!) and prevented them from entering the cup.  The exhibit also shows a carving of a camel in the background.  Though we understand today that there were larger animals in Africa and India, the camel would have been the largest land animal his disciples would have ever seen.

These two animals were among the unclean animals in religious Judaism.  It seems to have bothered Jesus that some religious people base their religiosity on focusing on many very small concerns, but seem to have missed far more important matters.  To quote Jesus in Luke 11:42 –

“But woe to you Pharisees!  For you tithe mint and rue and herbs of all kinds,
and neglect justice and the love of God; it is these you ought to have practiced, without neglecting the others.”

We all might reflect on how we and our nation’s leaders could live more in the spirit of the
prophets who admonished us: “What does the Lord require of you but to love
kindness, and to walk humbly with your God?” (Micah 6:8).

Today’s reflection is based upon the displays relating to the sea in our new Mediterranean cabinet seen in photo on the right, above.  The upper shelf shows our displays about mooring ropes.  Our next refection will be focused on the lower shelf.  It is about the salted fish industry, which will help many ancient texts to come alive.  Many of our museum’s exhibits are life-sized.  These cabinet exhibits are smaller, but never-the-less important.  Their subjects have seemed to fit in with Jesus’ teaching emphasis on learning from large and small things.