In the Bible it is presented to the prophet Samuel, and later to Nathan, that the Lord is not so hot on the idea of the people having a king who might abuse his power.  Nor is the Lord hot on the idea of them having a temple.  What is wrong with the tabernacle?  The people said the tabernacle was puny and all the nations around them had big temples and they wanted a temple.  Many people forget that the Lord was not so hot on the idea  of a temple.  As you know, God is always willing to compromise and work with what God can get.  God does not tire of trying to bless the people through good kings and good priests.  After the people get their wish for a king, a new vocation was needed.  The Lord raised up prophets to remind the shepherds(the shepherd kings) not to forget the weak, the poor, and the forgotten. 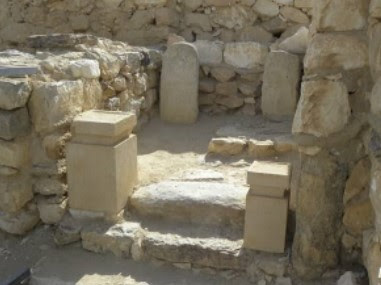 The Midianites had tabernacles but they were a desert people.  The altar of the tabernacle made of uncut stones was five feet high.  The Babylonians destroyed Solomon’s temple.  In small towns there were replicas of the temple with two stones of remembrance and two incense altars and a Holy of Holies.  At tel Arad, the Israelites made a temple in memory of the tabernacle (shown right).  The Holy of Holies was only four feet wide by five and a half feet deep.  At some sites, pottery was found with the inscription “YHWH was worshipped at this site.”  Canaanites had tower temples with walls that were ten feet thick with a small outer courtyard, a larger holy place, and then the largest of all was the Holy of Holies.  The temple had three compartments like the Israelite temple, but the sizes of each compartment were reversed.  Everyone flooded into the Holy of Holies in the Canaanite temple whereas in the Israelite temple only the high priest went into the Holy of Holies, and then only on one day during the year – the Day of Atonement. 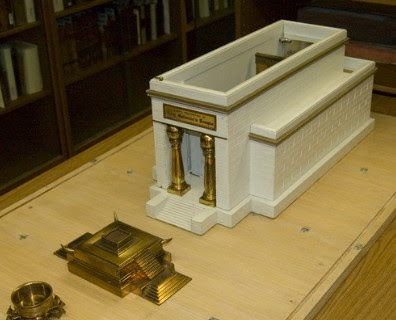 As you will recall, Jesus said “Solomon even in all of his glory was not like a small flower.”  Solomon used forced labor to build a house of worship for the God who freed slaves.  What is wrong with this picture? The prophets never let Solomon forget how wrong this was to use forced labor in the name of religion.

The temple is described as having two columns in front of it and a stairway leading up to a small entry court.  The side chambers were not as tall as the central nave.  This is a model of what it may have looked like.  Solomon’s temple was very much like a Phoenician pagan temple.  A Phoenician temple to Astarte, the moon goddess, influenced the design of Solomon’s temple.  Phoenician temples used winged lions with human heads to decorate their temples.  Solomon used the same type of decorations in his temple.

Herod was the same – he was even more of a “Texan” than Solomon.  Herod’s temple was two hundred feet high, equivalent to a twenty story high building.  The alter was 45 feet high, which was as tall as Solomon’s temple.  Size for its own sake is an abuse of power.  Size that is used for the people is wonderful.  There was such a temple industrial compound in Jesus’ day that most Jews had a love-hate relationship with the temple.  The Qumran community loved what the temple stood for, but they hated the corruption within the temple.  We should have a love-hate relationship with our own churches.  We should love what it stands for but hate the politics that sometimes seem to prevail.

Messiah is prophet, priest, and king.  Of course we have to have the Palm Sunday money-changing story.  This is Messianic activity.  The temple and the state are in constant need of renewal.  If you look for a purifier of the temple and one who is trying to rid the temple of abusive power, you will find that Jesus is Messiah-king.  Jewish sources tell us that Pontius Pilate determined whom the high priest was by what priestly family paid the most for the position.  Thus the priests controlled the buying and selling in the temple so they could have enough to pay “under the table” for the position of high priest.  Religious office could be purchased which is often the case in state religion.  It was often the case in Christianity in the Middle Ages.  In the Byzantine period in the 7th century A.D. one of the reasons it was so easy for Islam to take over was because of the corruption in the church. 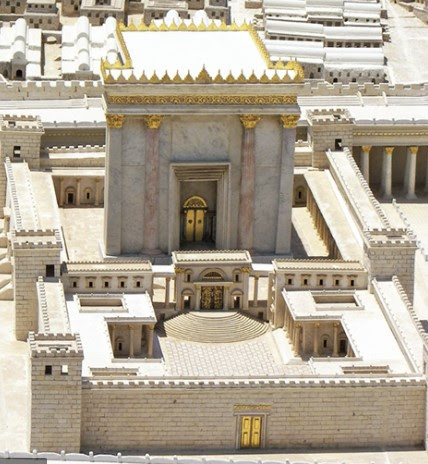 Herod also copied the pagan temple.  There is a temple at Palmyra, Syria that was amazingly well preserved until several years ago.  It was built the same time as Herod built the temple in Jerusalem.  Herod was responsible for patrolling with his army a road from Judea to the Euphrates River.  Herod said, “If you will give me the title of king, I will keep the Parthians from invading from the east.  The temple at Palmyra is a temple to Bel, the Roman pronunciation of Baal.  Herod’s temple design was influenced by pagan temple structures.  Herod used Roman engineers who did not believe in the God of Israel.  Josephus tells us that the top of the temple had pointed structures to keep the birds from perching on it.  The Bel temple has similar pointed structures.  When Annas, who had no sons, got too old to climb to the alter that was 45 feet high, he appointed his son-in-law Caiaphas to be the next high priest.  His family was always able to give Pontius Pilate more money than any other family.

The Knights of Malta from the time of the Crusades who ended up in Malta after a long journey to Cyprus, Rhodes, and Malta, put canons in front of each church.  Their image of king was one of power.  When you are not used to seeing canons in front of churches, your reaction is “What is wrong with this picture?”  The image seems to be saying, “Do what the priests say or be careful.”  It is easy to abuse power.  One example of this, certainly not the only example, is that Aztec and Inca villages were raided and pillaged and the gold booty was used to decorate churches in Mexico.  This is an abuse of power in the name of religion.

In the Hebrew Bible, small quiet voice stories follow loud big noisy voice stories.  In the story of Elijah and the prophets of Baal, there was a three year famine and there is a great contest on Mount Carmel.  The Baal prophets cried out, making quite a racket, but their god was silent.  The fires from heaven fell on the altar that Elijah quietly rebuilt.  Afterwards, Elijah ran to the palace of Ahab and Jezebel in Jezreel.  (Ahab and Jezebel’s palace has been found and has been excavated.)  Ahab and Jezebel had ivory inlays in their other palace in Samaria.  Amos said of some of the Omri Dynasty kings in Amos 6:4, “Alas, for those who lie on beds of ivory . . . but you haven’t remembered the poor.”  It is so easy for kings and the temple to abuse power.

The next story in I Kings 19 is when Elijah fled from Jezebel to the wilderness south of Beer-Sheba for forty days.  Once you say wilderness and forty, you are supposed to think: “This reminds me of Exodus.”  At the site of the town called Kuntillet Ajrud, potter from the 8th century was found.  People from the northern ten tribes had a way station here where they stopped when they were on pilgrimage going to the Sinai Desert.  A piece of pottery was found with drawings and an inscription “YHWH of Shomron (Samaria).”  What was a Yankee from Samaria doing so far south of Dixie?  There are five references that the Lord arose from Seir, which is a southeastern desert.  The northern Israelites knew where the holy mountain was and went on pilgrimages there.  Judah lost its memory of the holy mountain and the people did not go on pilgrimages.  The emphasis was on worshiping in Jerusalem only.  Every king of Judah was given a simple pass-fail exam.  Did the king enforce Jerusalem only worship?  If so, he was a good king.  Did the king allow hanky-panky” at the local cultic high places?  Of so, he was a bad king.  The northern tribes already had Dan and Bethel as worship sites.  Elijah knew where the holy mountain was.  Kuntillet Ajrud is only half a day’s walk from Mount Karkom, which has a solid flint plateau on top.  Flint is very shiny so you can imagine how that looks when lightning strikes at night.  It is the only mountain in Canaan that has a cave on the very top.

Elijah was in a cleft in a rock on the holy mountain and he wanted to die.  Jezebel did not repent.  Elijah was feeling “I alone am the only prophet of the Lord.”  This quiet story follows a dramatic story where there was a storm, an earthquake, fire from heaven, and landslides.  There were all of these dramatic things and then the story about “a still small voice.”  The Hebrew word used for “still small voice” is “bat kol,” or daughter of the voice.  This is often translated as “the word of the Lord came to the prophet” and it is often illustrated in movies with a well-resonated Hollywood voice.  The scriptures says, ” . . . but the Lord was not in the wind . . . the Lord was not in the earthquake . . . the Lord was not in the fire, but in the ‘still small voice.'”  This meant more to Elijah than the circumstances outside.

The work of the Spirit of God is inside – the voice within.  If we look for the dramatic outside circumstances, we won’t find Jesus as a powerful king and we won’t find the Kingdom of God.  If we are open to looking for and hearing quiet little voices within we will find a king of hearts, not a king of borders.  The kingdom is a reign rather than a realm.