Jesus Heals at the Pools

Jesus was intentionally drawn to people that the religious establishment of his day neglected. Jesus remembered the forgotten people.  Let us discuss some examples.

John’s gospel gives us the story at the Bethesda Pool.  Beth Eshdthayin (Aramaic) means, “House of the twin pools.”  Simon, son of a Hasmonean king, built this double pool.  At the time of Jesus, ancient pools were considered holy.  Old structures were also holy.  The pools built by Herod (the Pool of Israel and the Tower Pools) were not holy because they were still new.  They had not earned sanctity.  Whereas the Pool of Siloam, built by Hezekiah, was 750 years old and was considered holy.  The pools of Bethesda, built by Simon son of Onias, probably built in 130 to 110 BCE were considered old, and holy as well.  These pools were considered places of healing that had earned sanctity. 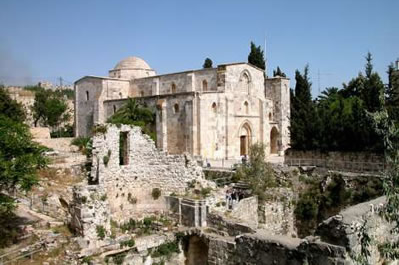 Healing stories at both of these old pools (Siloam and Bethesda) are reflected in John’s gospel.  John 5:5 says, “One man was there who had been ill for thirty-eight years.”  St. Anne’s church, which is a Crusader church, is built on the excavation site of the Bethesda pools,  although only. a portion of the twin pools has been excavated.

Ancient sources say that the lame would get close to the water by lying on the divide between the pools.  The pools were filled with rainwater that was collected in the rainy season (October through March) and it had to last from April through September.  The pool was very deep.  We know now that the pool had a siphon spring.  Cyril of Scythopolis said, “The northern pool turns red mysteriously from time to time.”  Red muddy water flowed into the pool when it rained and gravity caused the mud to settle at the bottom of the pool.  A siphon spring will bubble up unannounced.  When it says, “The waters were stirred,” it does not mean that there was wind on the surface.  Wind happens almost every afternoon in Jerusalem, causing the waters to be ruffled on the surface.  If that were the case it would have said the water was stirred by the wind.  In a siphon, spring water fills up cracks and pushes out near the rock and causes the water to bubble up.  The Gihon Spring is a siphon spring – when it flows, it flows for forty-five minutes and then it is drained into a cavern that holds forty-five minutes of water.  In the rainy season, the Gihon Spring flows about every two hours.  In the dry season, it flows every eleven hours. 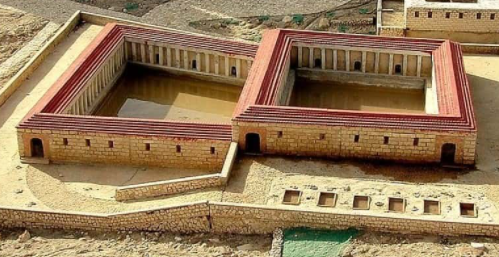 This is a model of what the pools might have looked like.  The pool on the right is the northern pool.  The portico in the middle would be open to both sides.

Keep in mind that the lame man is laying on the divide when the northern pool starts to turn red.  It is a fifteen to twenty foot drop to get from the divide to the water.  There was no shallow end of the pool.  For a lame person this is a “sink or swim” proposition.  The thought was that you had to be the first one in the water to be healed.  For thirty-eight years the man says he had no one to help him.  He needed someone to help him get into the pool in order to be the first one in.  He is a victim of the “myth of the pool.”  There is no way of telling whether the community giving us John’s gospel believes that an angel stirred the water.  The gospel says the people lying there believed that the angels stirred the waters and that the first one in would be healed.  If John’s gospel believed the “myth of the pool” it would likely have said “Jesus called for an angel to stir the water and the man was the first one in.”  The man’s healing had nothing to do with the stirring of the waters.

How do we bring in the Kingdom of God?  It is brought in when people are freed from myths that keep them paralyzed for thirty-eight years.  At first it sounds somewhat sinister when Jesus asked the lame man, “Do you want to be healed?” as if the man would say, “I like lying here for thirty-eight years.”  But this can be a very good question.  Do you want to be responsible for yourself?  Do you really want to be healed?

So we have the healing of the lame man in John’s gospel. We don’t know if the man’s paralysis was due to guilt about something.  It does not matter whether his paralysis was physiological or psychological since the result was his inability to walk.  The lame man’s sins were forgiven.  Jesus did not have to say, “Pick up your bed.”  He could have just said, “You are healed.”

After 135 CE when the city became a Gentile city, the pool became a Serapis healing pool and the Romans built a temple to Serapis there because something “weird” happened at this place. It continued as a healing place but was a pagan healing place.

There are all sorts of things that make us unable to function in society – phobias, neuroses, and psychoses.  It is great that so many Christians over time have been involved in helping people try to overcome these things so they could face society again.  People who were strict in their religious view were upset because it was Sabbath when Jesus said, “Pick up your bed and walk.”  Jesus understood that no matter what you do, some people will find a reason to criticize.  It was more important that people be healed.  There are no limits to God’s grace.

Jesus did not have to tell the man to “Pick up your bed.”  Similarly, Jesus did not need to tell the blind man at the Pool of Siloam to go to that pool  The man was born blind and Jesus made mudpacks from spittle and dust and put them on the unclean part of the man – his eyes.  If God is truly active in Jesus, all that was needed to heal the man were words.  This is an example of how the Kingdom of God means we must touch the unclean.  Whole healing cannot come to someone who believes they are unclean if people are not willing to touch the part of them or the aspect of their life that is unclean.

Jesus became unclean when he touched the man and for some  Jews that was a big deal.  For Jesus, it just meant he would need to use a mikvah and he would be clean again.  I am sure he used a mikvah or no one would have come to him, no one would stand where he stood.  The culture that Jesus lived in required that one had to be ritually clean.  Any place that Jesus stood or sat would be unclean for twenty-four hours in that tradition.  What was so wrong about having to use a mikvah following the good deed of touching someone who was unclean?  Think about how important touching can be (both physical and emotional connection).  One of the most unique aspects of Jesus’ healing ministry was that he was not afraid to touch the unclean. 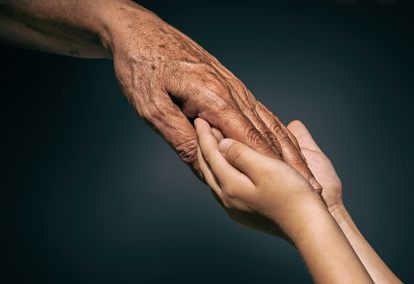 The king is working in very strange places – in places forgotten, the abandoned – people who believe they will never be touched again.  Putting the mudpacks on the man’s eyes required Jesus to touch him more than once.

The way we minister to help people see that God is with them is important particularly when they have heard from so many voices, some of them religious voices, that God is against them.  We can be God’s hands to touch people who feel untouchable.