Jesus as Savior and Healer

This Christmas we are erecting the head of our statue of the healing god Asclepius near the location on our Mediterranean Sea map of one of the largest healing centers in the Roman World.  Our reflection for this week’s news-letter is about how Jesus’ life’s work was associated with healing.

The meaning of Savior, Deliverer and Healer are similar in the Old Testament 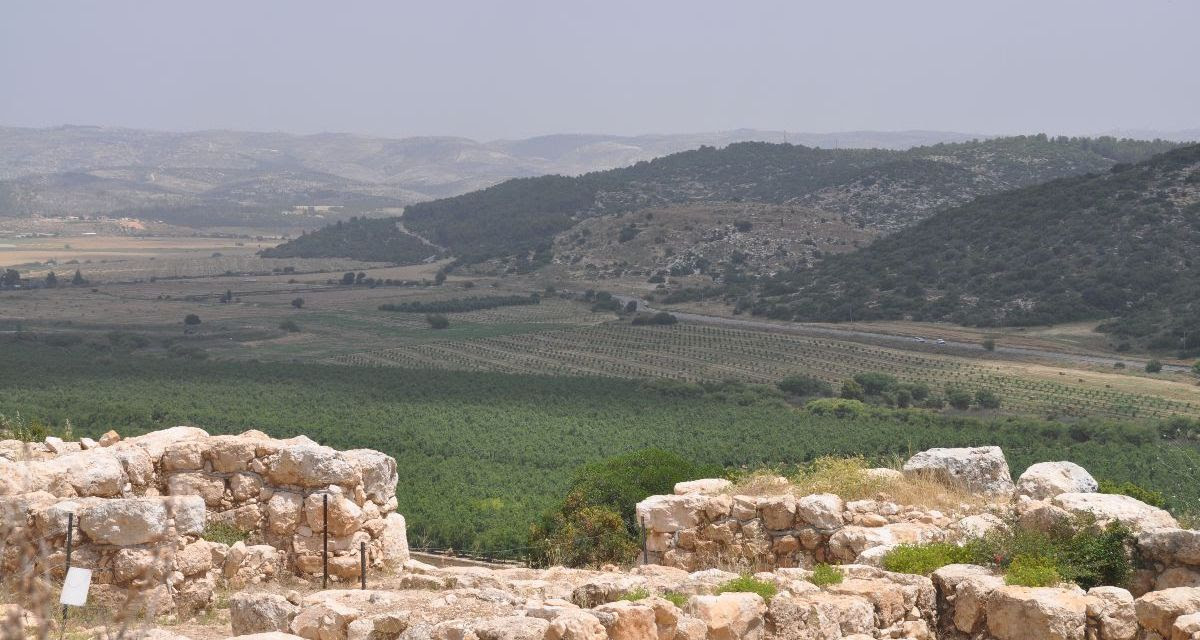 The earliest Old Testament references to salvation are references to victory in battle.  This photo is a view of the Elah Valley, the setting of the famous battle between David and Goliath in I Sam 17.  For the ancient prophets, only the strong arm of God could obtain salvation and deliverance from the enemy (Psa 98:1, Job 40:14, Isa 53).   Because God raised up saviors for the people, God’s character was also known as Savior. In the New Testament many references to salvation refer to the “End-Times”.  However, in the synoptic Gospels, salvation applies to the present (Mat 1:21, Luk 19:10) where healing stories are also salvation stories.  When dying on the cross, some of the crowd yelled, “He saved others; cannot he save himself?!”  The Greek word soteria means help, assistance and deliverance.  Jesus was known as a healer. The phrase carries with it, “He healed others, cannot he heal/save himself?”  In Mat 4:23 we find; “He went about all Galilee, teaching in their synagogues…and healing every disease and every infirmity among the people.”

How was the god Asclepius depicted by the Greeks and Romans? Here you can see our 3-foot-high head of Asclepius on a podium.  Note how the face is relaxed and looking slightly downward.  Of all the Greek hero-gods, only Asclepius is really aware of human suffering.  He is the god of healing and hears the cries of humanity.  When Churches could afford statues of Jesus in their places of worship, it is not surprising that often the artist chose to copy the head of Asclepius when depicting the head of Jesus.  Because of his association with healing, the title “savior” also became associated with Asclepius more than with other gods.  Perhaps, it is also not surprising that his healing centers were still honored by some Christians into the early Fourth Century AD.

The location of Asclepius’ head on our Mediterranean map 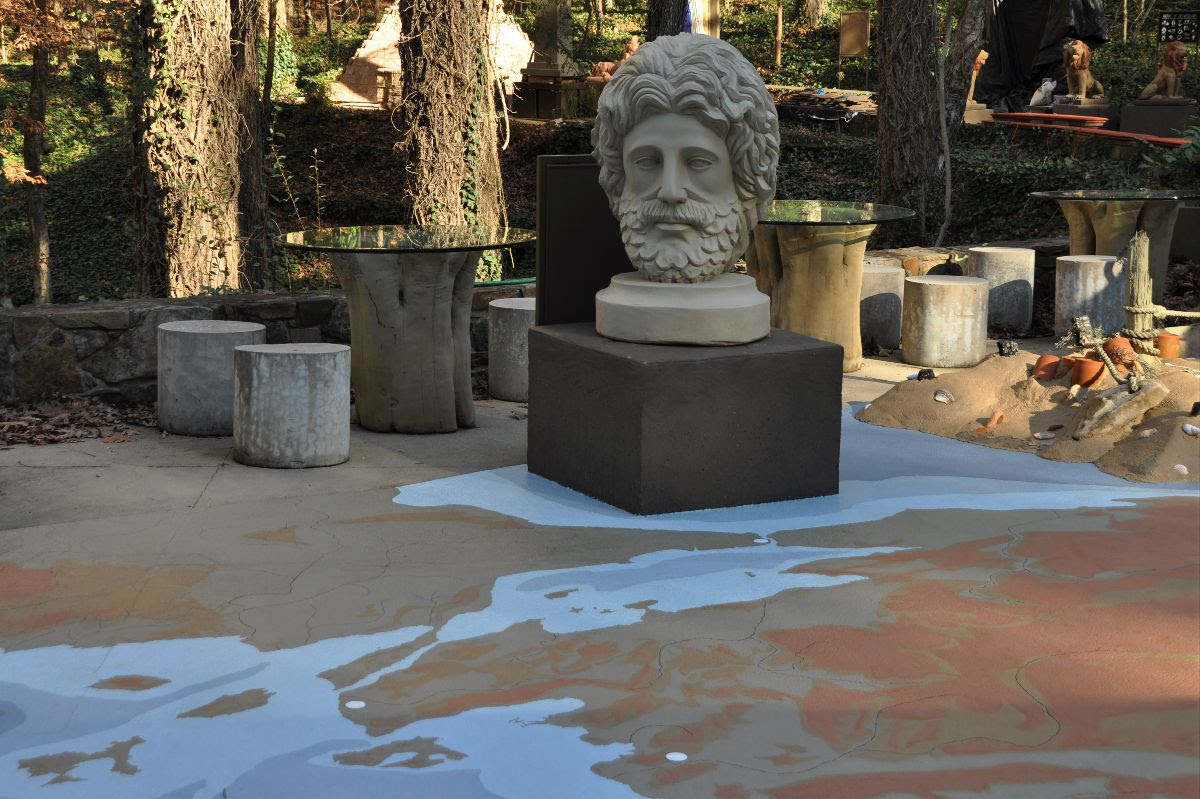 This portion of north-western Asia Minor has three cities highlighted with white circles.  The uppermost (next to the brown podium) is Byzantium, modern Istanbul, located on a narrow channel that separates the Black Sea, upper right, from the Aegean Sea on the left. Just below, the next white circle locates ancient Troy, of Homeric fame, on the coast of the Aegean.  The lower-most circle is Pergamum, in he bottom-center, It is the largest Asclepius healing center in all of Turkey.  The reddish-brown color represents a thousand-foot hill of the city’s acropolis.  The other major Asclepius healing center was that of Epidaurus in southern Greece.  Both had similar amenities which we will now mention. 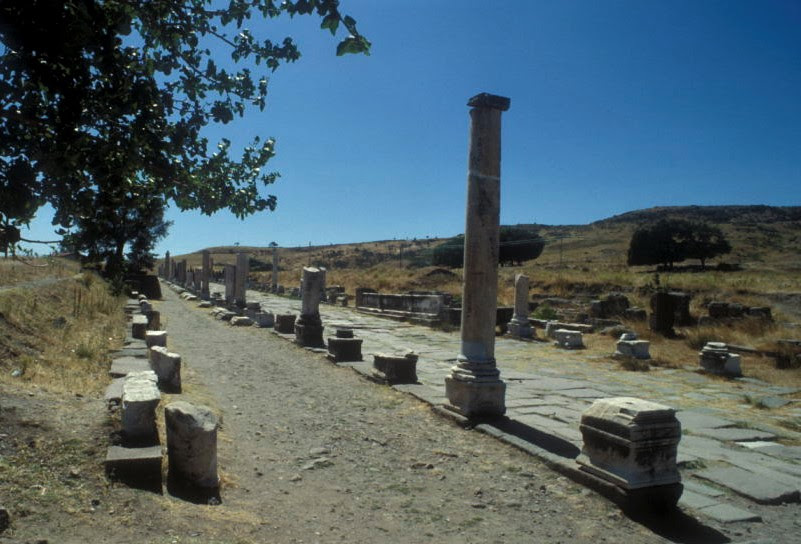 This photo shows the “pilgrim’s way,” which was lined with columns and places to rest as they approached the site.  Priests would inspect the ill persons in order to determine which ones seemed to be the best motivated to enter.  This process could be time-consuming.  Once inside, some cures could take a week, a month, or even years, causing many to have insufficient funds to continue.  Graffiti have been found with prayers and songs to be sung at the Temple to Asclepius invocating his presence with words like “Hail!” and “Attend!”. The atmosphere was cheered by instrumental accompaniment on horns, pipes, reeds and dances by muses. 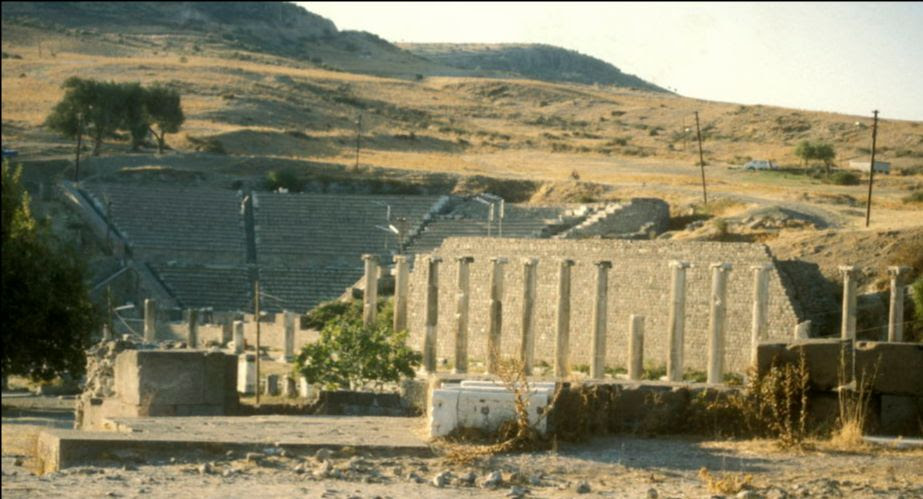 Inside facilities included public colonnades such as pictured here.  They hosted public lectures and debates and were supervised by “rhetors” (trained in the rules of rhetoric logic).  The theater on the left was for public performances to edify supplicants.  Other positive features helped present an optimistic atmosphere, such as frescoes, friezes art galleries and hundreds of statues.  Other decorations included zoological parks, woodlands, aviaries, tamed sacred snakes, and pools of trained fish wearing jewelry on their fins.  There were dormitories and places for meals were available, paid for by some participants hoping to please the gods for their favor.

Pergamum and Epidaurus had long, darkened tunnels which were a part of the healing process.  Entering them, the Rite of Incubation would begin.  People were encouraged to sleep there and hoped for a dream to come to them about their healing.  These were called “oracles from the gods” and were usually interpreted by a priest or a diviner. 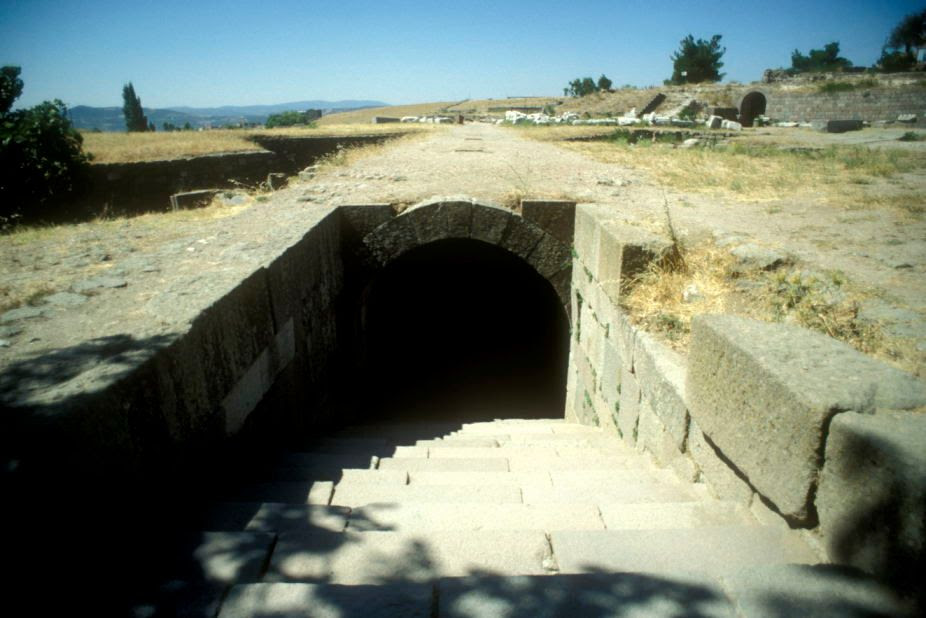 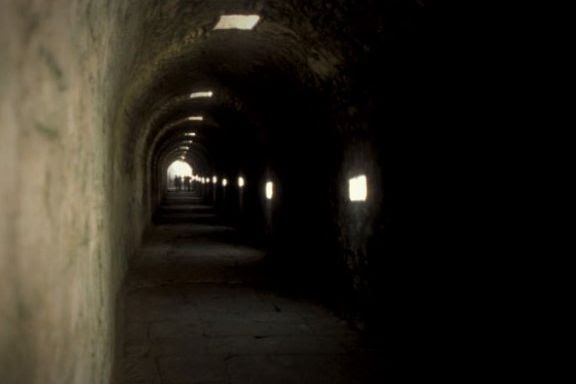 In spite of the beauty of the grounds above which we mentioned, below ground things could become tragic.  Several examples have been recorded with interpretations that were rather enigmatic leaving the supplicant hanging on more than one possible understanding.  Tragically, these “cures” often involved enduring blood-letting, running barefoot in the cold, and walking 50 miles in the broiling sun (none of which would be recommended today for a sick person). 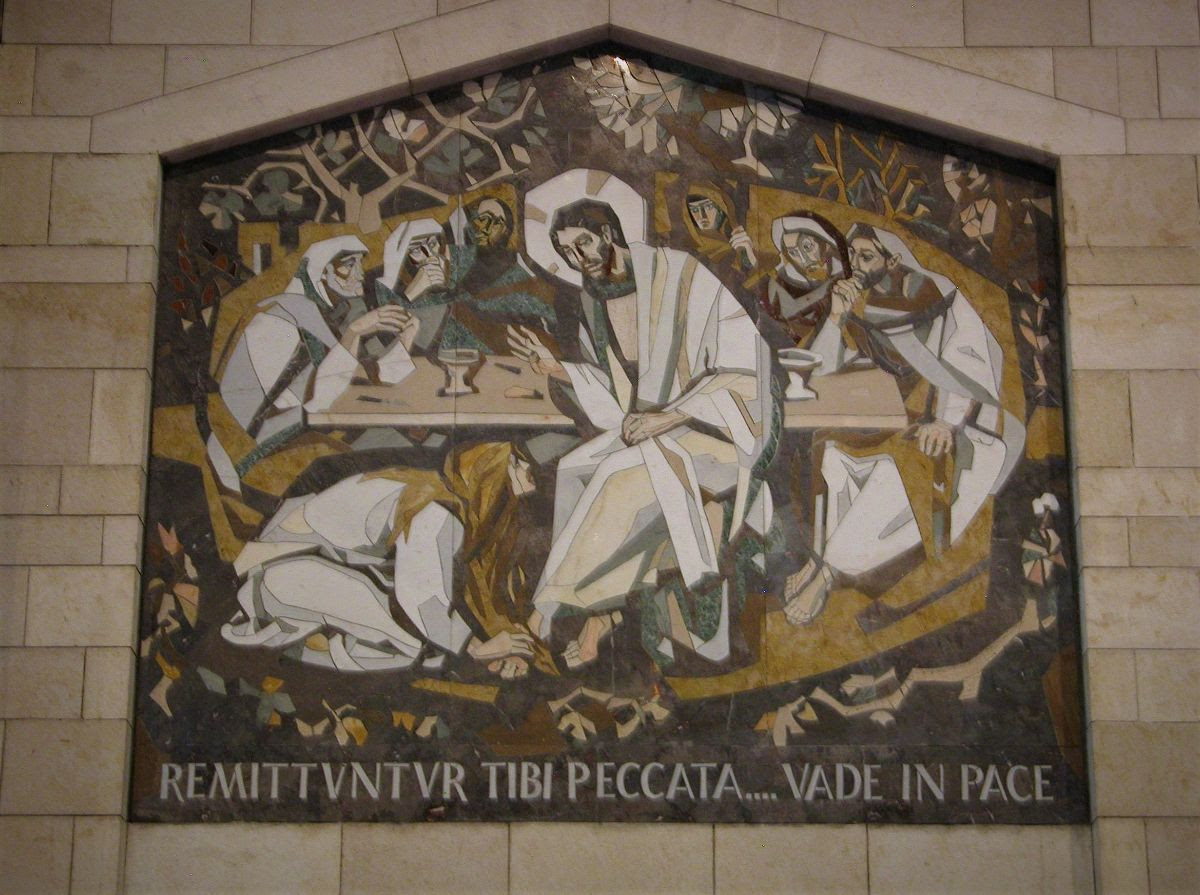 The unification of mind, spirit and body to aid healing can be found in both Christian and pagan traditions. Perhaps sensing that guilt and depression may have been a part of the man’s illness Jesus assured the paralyzed man (Mat 9:2) that his sins were forgiven before his healing.  To the unnamed crying “sinful woman” in this photo, Lk 7:48 reminds us that Jesus said, “Go and sin no more”.  It has been refreshing to learn how wise the planners of the Asclepius centers were for surrounding sick people with hopeful, beautiful places. Unfortunately, as mentioned, there were occasions of abuse and taking advantage of some patients.  And, God knows, there certainly have been some charlatans in some “Christian healing ministries” which are disgusting. 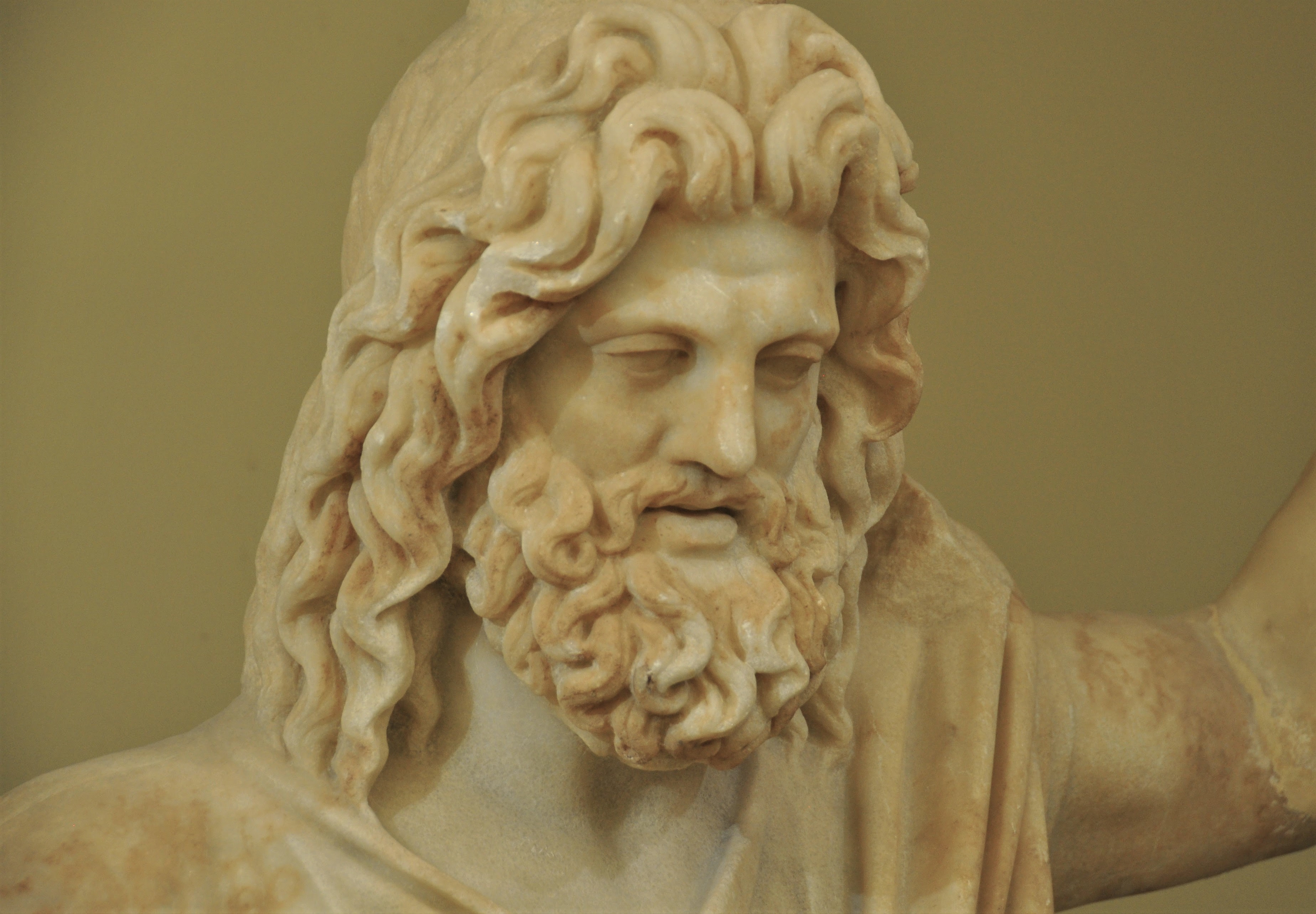 This Asclepius statue was found at a healing site on the Island of Crete.  The facial expression and eyes beautifully show him concentrating on listening with compassion.  Asclepius is often standing beside one of his daughters, Hygeia.  Her statues also picture her with a tender expression on her face.  One can see why his likeness was sometimes used to depict the face of Jesus in some statuary.  The holistic understanding of illness in Scripture through mind, spirit and body, makes the mystery of the incarnation at Christmas all the more encouraging as we celebrate the joy of God with us through Christ.

A note from Jim & Hannaniah
The newsletter you are reading is arriving at the end of 2020 when we are still in the middle of the COVID-19 pandemic.  The Encounters in Archaeology Board is working remotely to maintain our current website, delivering our e-newsletter, planning scholarships for hopeful biblical study-tours, and developing our new museum.

In more than 40 years of operating our non-profit museums in Jerusalem and then here in the United States, we have weathered many storms, but none which has impacted our ability to receive financial help as much as now.  But with your help, we are determined to not give up.  We will continue via the web, email and print to bring you insights based on the latest scholarship in archaeology as we apply them to our exhibits, lectures and museum walks, and biblical studies as we did in this newsletter.

Your generous tax-deductible gift will ensure that Encounters in Archaeology continues this very important work for understanding the background of biblical texts.

Please give what you can today.