Jesus and the Hemorrhaging Woman

Today we look at yet another example of how Jesus presented the kingdom of God in a way that would have been very unexpected at the time.

The story of the hemorrhaging woman is well known.  It appears in all three of the synoptic gospels (Matthew, Mark, and Luke).  Jesus and the disciples came from the other side of the sea to Galilee.  When they came ashore Jesus began speaking to the crowds on the Plain of Gennesaret.  In the distance there was an unclean woman cupping her ear trying to hear Jesus.  The woman has been unclean for twelve years so everybody knows whom she is and would not allow her to get close to them.  Apparently Jesus had a reputation that he did not mind touching unclean people. 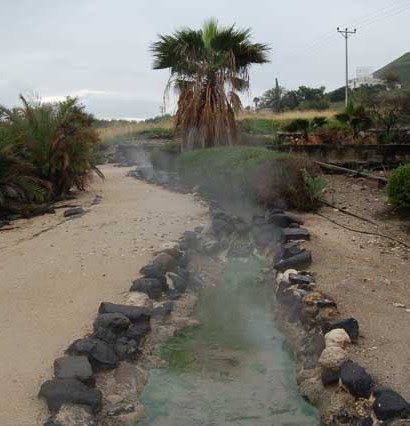 The woman spent all that she had on cures and the doctors could not help her.  Galilee has four hot springs and the main healing places at the time were hot springs.  The second largest Roman bath in the world called Hamat Gader is in Galilee, second in size only to one in Italy.  Hamat Gader has five different springs in one area, each having a different temperature.  Most healings were at the hot springs and the woman had probably gone there.

Other than hot springs the main medical practice in the first century was bloodletting.  A doctor might cause eight to ten cups of blood to be let at any one time.  A cut was made on the body and then a piece of burning material was placed in a little cup that was turned upside down on the wound.  As it cooled it created a suction action that drew the blood out.  We know from more recent history that even until the mid-1800s bloodletting was a common medical practice.  It is amazing to think that a woman was losing blood and the prescribed treatment was to take even more blood! Mark says “doctors could not help her.”  Luke, who may have been a doctor himself says, “no one could cure her.”

The Cloak and Tassels

We know that religious Jews have fringes on the right and left side of the cloak.  The fabric goes up the front and over the back like a poncho, it is stitched together on the sides, and there would be fringes on each side.  Orthodox Jews follow this custom today.  No two fringes or tassels are alike.  Every family had a different way of doing their tassels.  In Matthew, which was written for a Jewish audience, the woman wanted to touch the fringe of the hem of his garment.

This fringe is called tsitot, tassels.  Numbers 15:38 says, “Throughout the generations to come you are to make tassels on the corners of your garments, with a blue violet thread woven into each tassel.”  Religious Jews today wear a tallit, an under garment that is like a long T-shirt.  It has tassels that can be seen hanging over the person’s belt in the front and the back.  Prayer shawls used by Jews today are a memory of the outer robe with the tassels.  Fringes on the vestments for Christian clergy are also memories of Old Testament customs.  When the Samaritan woman said to Jesus at the well, “I see you are Jewish,” she could see the tassels on his garment.

The book of Numbers commands that there be tassels on one’s garment with the blue thread.  The Mari tablets tell us that the tassels stand for three things:  1) one’s place in society, 2) one’s authority, and 3) one’s priestly purity. 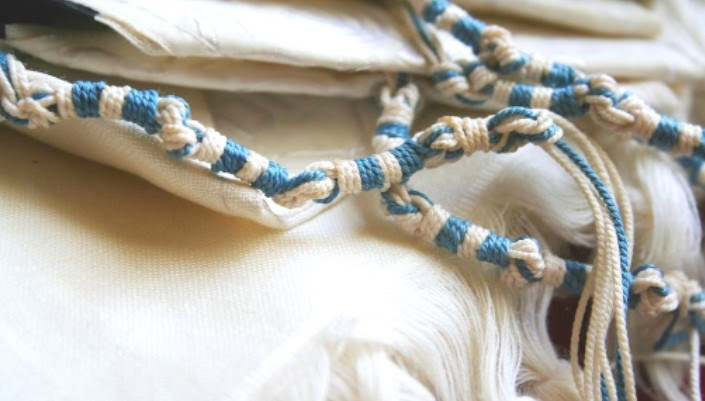 Place in Society –
The first thing a tassel represented was one’s place in society. Wealthier people had longer tassels.  If a woman married someone who was wealthier than she, her tassels became longer and fancier and she used her husband’s family pattern.  From the Mari tablets, we learned that the act of cutting a woman’s tassels back to the length of her social-economic group before she was married produced a divorce. The woman with the case of hemorrhages was saying that she believed Jesus had a unique place above everyone else around the Sea of Galilee, and she wanted to touch the symbol of his place in society.

Authority –
The second thing a tassel stood for was one’s authority.  One of the Mari tablets says in a message from a prophet to a king, “P.S., note two enclosures, some of my tassel and some of my hair.”  These two things told the king who the prophet was and his authority.  One could do business with a tassel by pressing it in clay – it was the “credit card” imprint of that culture.  We have found evidence of these in archaeological digs.  The woman wanted to touch the symbol of Jesus’ authority.

Priestly Purity –
The third thing the tassel stood for was one’s priestly purity.  According to the books of Numbers and Deuteronomy, only priests could wear a mixture of wool and linen (animal and vegetable) in their garments.  Every Israelite, however, was told to put a wool blue-violet thread in their linen tassel.  Every Israelite was to wear the priestly mixture in their tassels.  Thus the phrase, “Thou are a priestly nation.”  The woman, who was ritually and ceremonially impure, believed that if she could touch the symbol of Jesus’ priestly purity, she would be whole.

The disciples and the crowd were pushing Jesus towards Jairus’ house. Jairus was the archisynagogi, the leader of the synagogue. According to the Jewish sources, a good appointment for a rabbi was one where your house was next to the synagogue and not far from the public toilet!  A house in front of the Capernaum synagogue is the only house in Capernaum that has so far  been found that had a guestroom with a tile roof.  It is a good guess that this was Jairus’ house.

With everyone pushing Jesus toward Jairus’ house, the woman finally had a chance to come up behind Jesus to get close enough to him to touch the fringe of his garment.   All three gospels say the woman came from behind. When the woman touched Jesus, he stopped dead in his tracks and asked, “Who touched me?”  (I love the honesty of Peter, he says “What do you mean who touched you?  Everyone is pushing you toward Jairus’ house.”)

Only family members were supposed to touch your tassel.  Jesus invited the woman to “familiarity,” and called her “daughter.”  In all three gospels, Jesus says to the woman, “Daughter your faith has made you well.”  Jesus then continued on to Jairus’ house.